Istiqlal Mosque is the largest mosque in Southeast Asia and the third largest Sunni mosque in term of capacity. 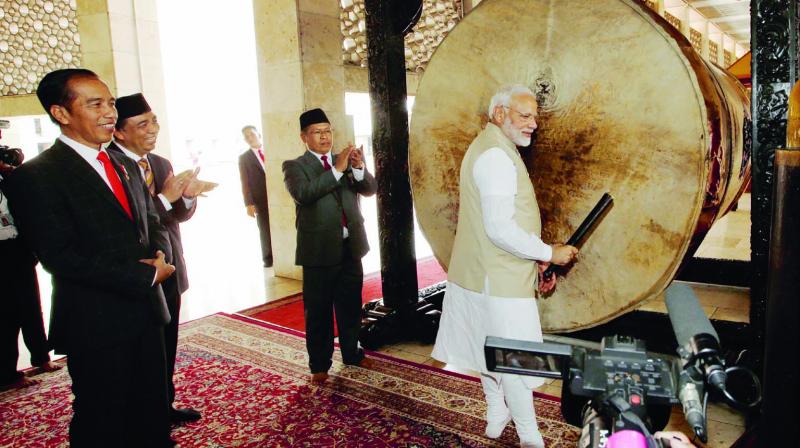 Prime Minister Narendra Modi pauses after hitting a ‘bedug,’ a large drum traditionally hit as a prelude to the call for prayer, as Indonesian President Joko Widodo (left) looks on during their tour at the Istiqlal Mosque, Southeast Asia’s largest mosque, in Jakarta on Wednesday. (Photo: AP)

Jakarta: Prime Minister Narendra Modi on Wednesday paid a visit to Indonesia’s grand Istiqlal Mosque, the largest in Southeast Asia, during his first official visit to the country.

Prime Minister Modi was accompanied by Indonesia President Joko Widodo during his visit to the mosque, which was built to commemorate Indonesian independence and opened to the public in 1978. “Glad to have visited the Istiqlal Mosque, one of the largest mosques in the world,” Modi said in a tweet.

“Ramadan Karim! Indonesian President @jokowi accompanied PM @narendramodi during a visit to Istiqlal Mosque, the national mosque of Indonesia and the largest in southeast Asia, in the holy month of Ramadan,” Ministry of External Affairs Spokesperson Raveesh Kumar tweeted.

Istiqlal Mosque is the largest mosque in Southeast Asia and the third largest Sunni mosque in term of capacity.