The passenger van travelling from Rawalpindi to Peshawar collided with a truck coming at Abbottabad chowk and hit a gas pipeline. 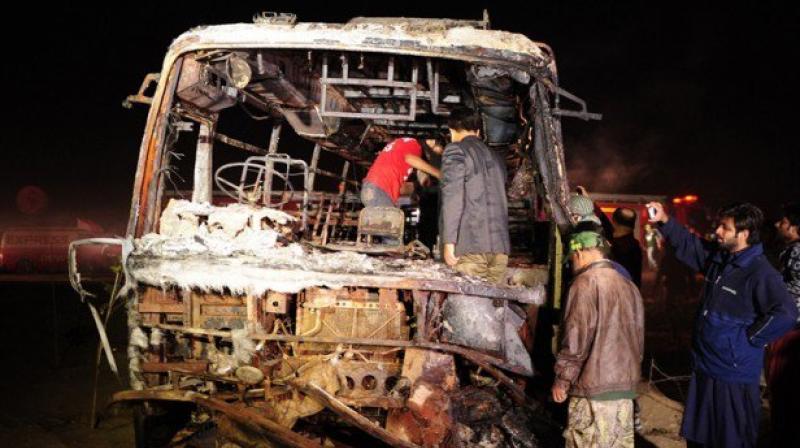 Expressing grief over loss of lives, Punjab Chief Minister Shehbaz Sharif has directed the concerned authorities to submit a report on the incident. (Photo: AFP/Representational)

Peshawar: 16 people, including women and children, were killed on Sunday when a van caught fire after hitting a gas pipeline in Pakistan's Khyber-Pakhtunkhwa province, officials said.

The passenger van was travelling from Rawalpindi to Peshawar when it collided with a truck coming from the opposite direction at Abbottabad chowk and then hit a gas pipeline in the area, The Express Tribune reported, quoting officials.

The fire engulfed the vehicle and all the 16 passengers, the report said. The bodies of the victims have been severely burnt and therefore, identification through DNA testing may not be possible, rescue officials said.

Police personnel as well as rescue officials arrived at the scene of the incident soon after the blaze was reported and gained control over the fire shortly after.

The bodies were then removed from the van and transferred to District Headquarters Hospital Hassan Abdaal. Expressing grief over loss of lives, Punjab Chief Minister Shehbaz Sharif has directed the concerned authorities to submit a report on the incident.

Pakistan has an appalling record of fatal traffic accidents due to poor roads, badly maintained vehicles and reckless driving.