At least 2.5 million people in ten districts risk falling in the way of the severe cyclonic storm. 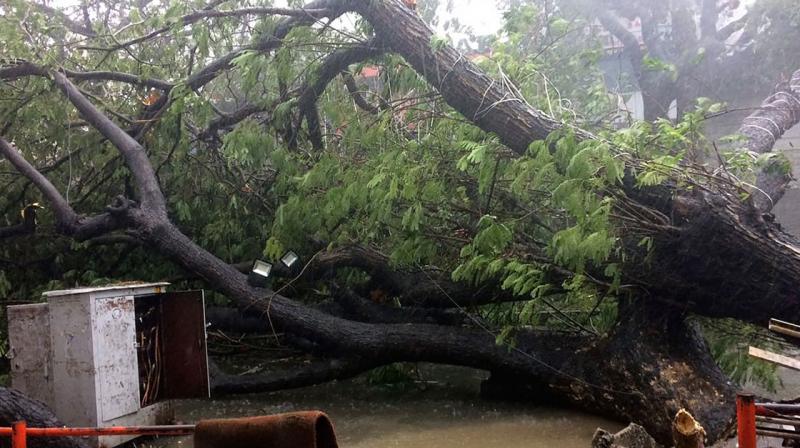 Bangladeshis stand by the coast of the Bay of Bengal, before the expected landfall of tropical storm Mora in Chittagong, Bangladesh, Monday, May 29, 2017. (Photo: AFP/Representational)

Dhaka: Cyclone Mora made landfall in Bangladesh on Tuesday damaging several houses and packing winds of up to 117 kilometres per hour after authorities evacuated hundreds of thousands of people from the coastal areas.

In a special bulletin, Bangladesh Meteorological Department said the severe cyclonic storm 'Mora' moved northwards over North Bay and started crossing Cox's Bazar-Chittagong coast at 5:30 am IST. It is likely to move in a northerly direction further, it said.

Under its influence, gusty or squally wind with rain or thunder showers were continuing over North Bay and the coastal districts and maritime ports of Bangladesh, the Daily Star reported.

Maximum sustained wind speed within 64 km of the cyclone centre was about 89 kph rising to 117 kph in gusts or squalls, it said. As many as 300,000 people had been taken to shelters in more than ten districts most vulnerable to the cyclone, Additional Secretary Golam Mostafa, a spokesman for the disaster management ministry's control room, was quoted as saying by B D News.

Under the influence of the cyclonic storm, 'the low-lying' areas of the coastal districts and their offshore islands were likely to be inundated by storm surge of 4-5 feet height above normal astronomical tide, the Met office said.

Bangladesh is often hit by bad storms between April and December that cause deaths and widespread destruction. Cyclone Roanu hit the southern coast of Bangladesh last year, leaving 20 people dead and forcing half a million to flee their homes.