The pontiff has avoided direct discussion of the crisis to avoid setting off Buddhist hardliners. 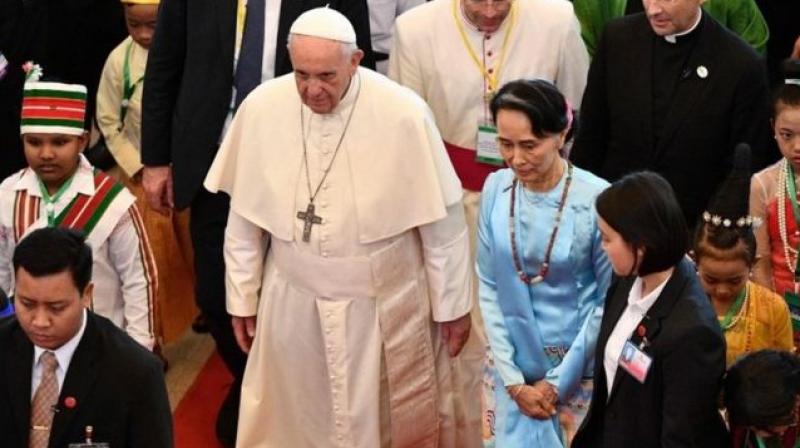 Pope Francis is on a four-day trip in mainly Buddhist Myanmar, where he has refrained from directly weighing-in on the Rohingya crisis, instead choosing the deliberate language of tolerance and forgiveness. (Photo: AFP)

Yangon: Pope Francis Wednesday urged Myanmar's Buddhist clergy to conquer "prejudice and hatred", a carefully-worded appeal to powerful monks in a country facing intense scrutiny over its persecution of the Muslim Rohingya.

Some extremist Buddhist monks have spewed anti-Muslim hate speech in Myanmar for years, helping to calcify attitudes towards Rohingya Muslims.

Buddhist authorities have moved to rein in radical clerics in recent months.

"If we are to be united, as is our purpose, we need to surmount all forms of misunderstanding, intolerance, prejudice and hatred", he said, sitting across from a row of orange and maroon-robed monks in a temple complex in Yangon.

The Catholic leader is on a four-day trip in mainly Buddhist Myanmar, where he has refrained from directly weighing-in on the Rohingya crisis, instead choosing the deliberate language of tolerance and forgiveness.

The pope has previously spoken in defence of the Muslim group, who the UN says are victims of an ethnic cleansing campaign by Myanmar's military launched in late August.

But the pontiff has avoided direct discussion of the crisis since arriving on Myanmar soil, where any mention of the Rohingya's name has the potential to set off Buddhist hardliners.

An ultra-nationalist monk-led group at the forefront of anti-Muslim rhetoric, known as Ma Ba Tha, have flourished in recent years.

The Sangha in 2017 formally disbanded Ma Ba Tha - which quickly regrouped under a new name - and placed curbs on their most outspoken leader Wirathu.

Domestic views on the Rohingya crisis veer sharply from the international take on a humanitarian catastrophe that has sent 620,000 people fleeing to Bangladesh.