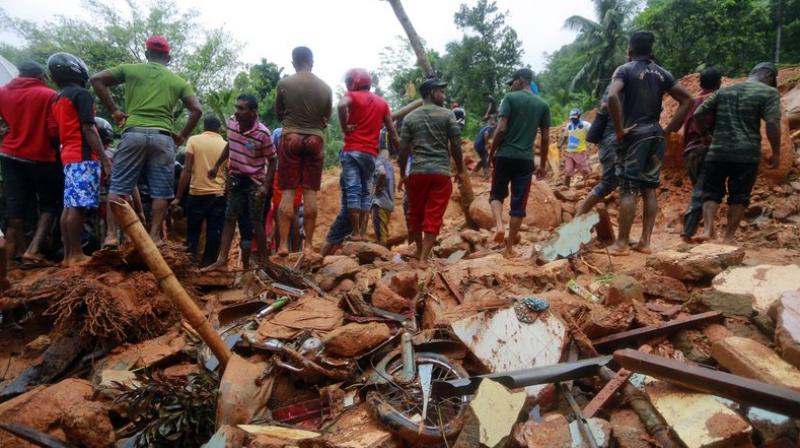 Sri Lanka has appealed for outside help as the death toll from floods and mudslides on Saturday rose to 100 with 99 others missing. (Photo: AP)

Friday's deluge also caused the island's worst flooding in 14 years and drove nearly half a million people out of their inundated homes in the southern and western regions.

The DMC said 104 people were still listed as missing while another 88 remained in hospital.

"The helicopter crashed onto a house, but fortunately there were no casualties," a police official in the area told AFP by telephone.

The air force has deployed a dozen aircraft for mercy missions to evacuate marooned villagers as well as carry food and other essentials to the affected areas.

The government said relief operations had intensified over the weekend following a break in the monsoon rains.

However, the meteorological department said it expected more rain on Monday and Tuesday that could hamper relief operations.

Flood waters were receding in the worst affected districts of Ratnapura and Kalutara but the authorities said cleaning up operations could take weeks.

Pakistan was in talks with Colombo to send relief supplies. Islamabad recently gave 10,000 tonnes of rice to Sri Lanka to help drought victims.

The meteorological department said the rains ended a prolonged drought that had threatened agriculture as well as hydropower generation.

The flooding is the worst since May 2003 when 250 people were killed and 10,000 homes destroyed after a similarly powerful monsoon, officials said.