40 dead, several others injured in multiple blasts near media outlet in Kabul

Afghan media has previously been targeted by militants, underlying the risks faced by journalists in the war-torn country. 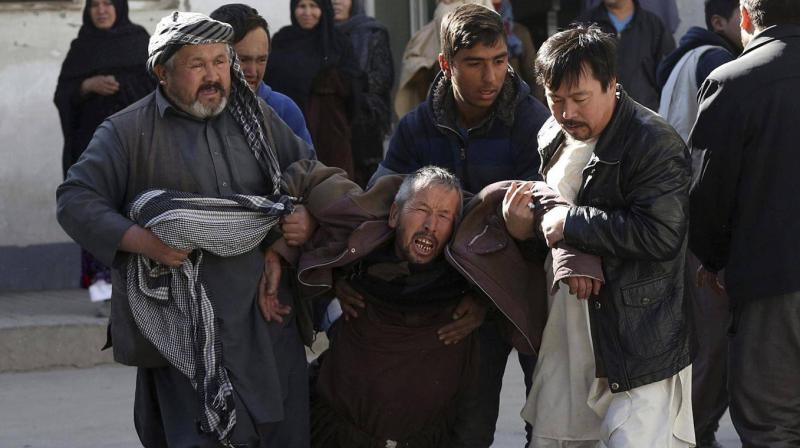 There was no immediate claim of responsibility for the attack, which comes days after a suicide bomber killed six civilians in an assault near an Afghan intelligence agency compound in the city. (Photo: AP)

Kabul: At least 40 people were killed and many others were wounded in multiple blasts near a media outlet and mosque in Kabul on Thursday, officials said, in the latest violence to hit the Afghan capital.

There was no immediate claim of responsibility for the attack, which comes days after a suicide bomber killed six civilians in an assault near an Afghan intelligence agency compound in the city.

"There were two explosions. We still do not know the target of the attack, but Afghan Voice Agency is in the area of the attack," interior ministry spokesman Najib Danish said.

AFP reporters near the scene of the blast heard a third explosion, suggesting the attack may still be under way.

A hospital official told local TV that 18 wounded had been brought to his facility.

"Five of the wounded are in critical condition and our doctors are working to save their lives," Sabir Nasib, head of Istiqlal hospital, said.

A man in the vicinity of the attack said he heard a "big boom".

"We do not know the numbers (of casualties). When the explosion happened we immediately fled," he told Tolo News.

Photos posted on Afghan Voice Agency's Facebook page showed the inside of a compound with debris and bodies lying on the ground.

Afghan media has previously been targeted by militants, underlying the risks faced by journalists in the war-torn country.

In November an attack on Afghan broadcaster Shamshad TV in Kabul, claimed by the Islamic State group, left at least one person dead and two dozen others wounded.

IS also claimed Monday's attack on the National Directorate of Security spy agency in a statement via their Amaq propaganda arm.

It was the latest claimed assault by the Middle Eastern jihadist group in Kabul, which in recent months has become one of the deadliest places in the war-torn country for civilians.

Security in the city has been ramped up since May 31 when a massive truck bomb ripped through the diplomatic quarter, killing some 150 people and wounding around 400 others -- mostly civilians.

IS has expanded its presence in Afghanistan since it first appeared in the region in 2015.

It has scaled up its attacks in Kabul, including on security installations and the country's Shiite minority.