Chinese foreign ministry spokesperson Lu Kang said the Sikkim segment of the Indo-China border was recognised by both nations. 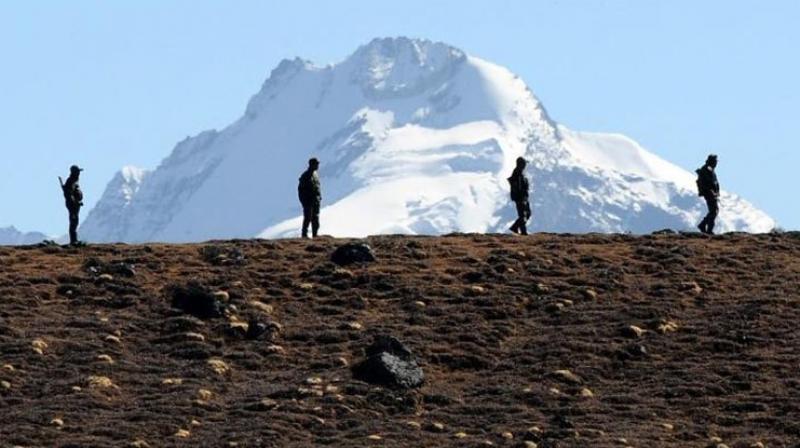 He also asserted that China has shut the Nathu La pass entry for Indian pilgrims travelling to Kailash Mansarovar because of the border standoff. (Photo: AFP)

Beijing: China has justified the construction of a road in the Sikkim sector, saying the area “undoubtedly” is located on its side of the border as per the 1890 Sino-British Treaty.

“According to the treaty, ‘zhe’ is the ancient name of Sikkim,” Chinese foreign ministry spokesperson Lu Kang said in a statement.

“As per this treaty, the area over which the Indian Army has raised objection is undoubtedly located on the Chinese side of the border,” he said on Tuesday.

The statement came a day after the Chinese military accused the Indian army of stopping the construction of the road in what it claims to be China’s “sovereign territory” in the Sikkim section of the India-China border.

Lu said the Sikkim segment of the China-India border was recognised by both China and India.

“Indian leaders, the Indian government-related documents, the Indian side in the Sino-Indian boundary issue Special Representatives meeting confirmed that the two sides signed the treaty in 1890, the ‘Sino-British treaty’ and the China- India boundary of Sikkim to have the direction of a consensus,” he said.

“Compliance with these treaties and documents is an international obligation that not to be shirked by the Indian side,” he added.

A Chinese foreign ministry statement, issued on Monday night, said “the Indian border guards crossed the boundary in the Sikkim section of the China-India border and entered the territory of China and obstructed normal activities of the Chinese frontier forces in the Donglang area recently, and the Chinese side has taken counter-measures.”

Lu, earlier on Tuesday, said China lodged a diplomatic protest with India accusing Indian troops of “crossing the boundary” in the Sikkim section and demanded their immediate withdrawal.

He also asserted that China has shut the Nathu La pass entry for Indian pilgrims travelling to Kailash Mansarovar because of the border standoff.

A hard-hitting article posted on the website of the state-run Global Times on the issue said, “Indian troops’ provocation brings disgrace to themselves” and they should be forced to retreat “by all necessary means”.

“The Indian government made no objection to the Sikkim section of the China-India border. Allegations of intrusions along the western section of the China-India border often emerge, but face-offs in the Sikkim section are rare. The Nathu La pass in Sikkim was reopened in 2006, because there is no border dispute between China and India over this area,” it said.

“It remains unclear whether this flare-up is the fault of low-level Indian troops or a tentative strategic move made by the Indian government,” it said.

“Whatever the motive is, China must stick to its bottom line. It must force the Indian troops to retreat to the Indian side by all means necessary and China’s road construction mustn’t be stopped,” the article said.

As the China-India borderline has not been demarcated completely and the two countries have a different understanding about the Line of Actual Control, troops from both sides often stray across in some areas, it noted.

“However, almost all frictions are fed to the Indian media by the Indian military which they hype time and again”.

“China avoids making an issue of the border disputes, which has indulged India’s unruly provocations. This time the Indian side needs to be taught the rules,” the article said.

“India cannot afford a showdown with China on border issues. It lags far behind China in terms of national strength and the so-called strategic support for it from the US is superficial,” the article said, adding that China has no desire to confront India.

“Maintaining friendly ties with New Delhi is Beijing’s basic policy. But this must be based on mutual respect. It’s not time for India to display arrogance toward China,” it said.