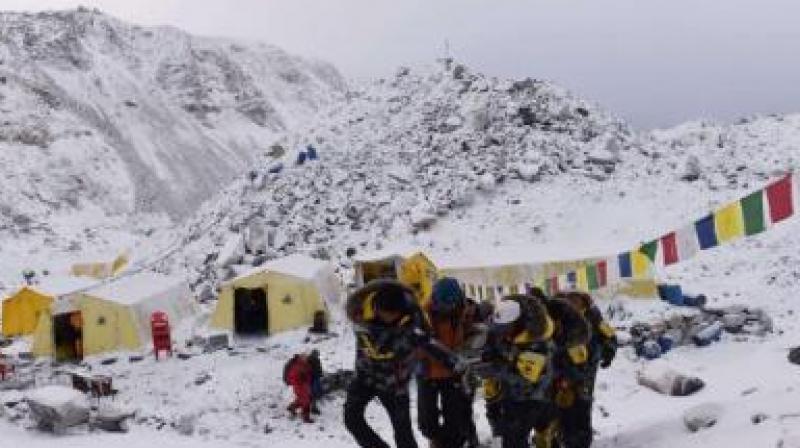 Nepal will, however, seek help from India and China for getting crucial data for the exercise, Nepal’s Survey Department’s Director General Ganesh Bhatta said. (Photo: File/Representational)

Nepal has rejected India’s offer to jointly re-measure the height of the world’s highest peak Mount Everest following the massive earthquake in 2015 and will carry out the exercise on its own, the top official of the Himalayan nation’s survey department has said.

Nepal will, however, seek help from India and China for getting crucial data for the exercise, Nepal’s Survey Department’s Director General Ganesh Bhatta said.Sources in New Delhi said that China could be behind Nepal refusing India’s proposal to jointly re-measure Mount Everest as the peak is on the Sino-Nepal border.

The 7.8 magnitude quake in April 2015 had devastated the Himalayan nation, killing more than 8,000 people and displacing lakhs of others. The Survey of India, a 250-year-old institute under the DST, proposed re-measuring Mt Everest as an ‘Indo-Nepal Joint Scientific Exercise’ with Nepal’s survey department.

“They have not responded to our proposal. Now they are saying that they are not involving either India or China. They will be re-measuring Mt Everest on their own,” Major Gen Girish Kumar, the Surveyor General of India, said.

Kumar said that a representative from India attended a meeting convened in Kathmandu, where surveyors and scientists from different countries including China were also present. “There was a proposal from India to help us measure Mt Everest, but we are doing it on our own,” Bhatta, who is in Nepal, said over phone.

When asked whether China had also given a proposal to re-measure Nepal, he replied in the negative. He noted that China had measured Mt Everest in 1975 and 2005 while Indian surveyors had carried out a similar mission in 1956. The SGI had also measured the Everest during the British era.

“India was the first country under Sir George Everest’s leadership as the Surveyor General of India to have declared the height of Mount Everest and establish it as the highest peak in the world in the year 1855,” the Department of Science and Technology’s website states.

Bhatta said preparatory work has already begun on the project and they are gathering preliminary data crucial for this survey. The massive earthquake has “shook” even the basic parameters of Nepal, so data from other countries will be crucial, he said.

India is being requested to provide the levelling data while China has been asked to provide the gravity data. The data will be very important to determine the height of Mt Everest, Bhatta said. “We won’t be crossing over into the Chinese territory for measurements.

The work of summiting Everest will take place in 2019,” he said. Kusalaraj, a scientist at the Centre for Earth Science at the Indian Institute of Science, Bengaluru, said minor change in the height of Mt Everest may not have a direct impact on the lives of people immediately.