The protesters have linked the amended wording to blasphemy - a highly contentious issue in Muslim Pakistan that has often fuelled violence. 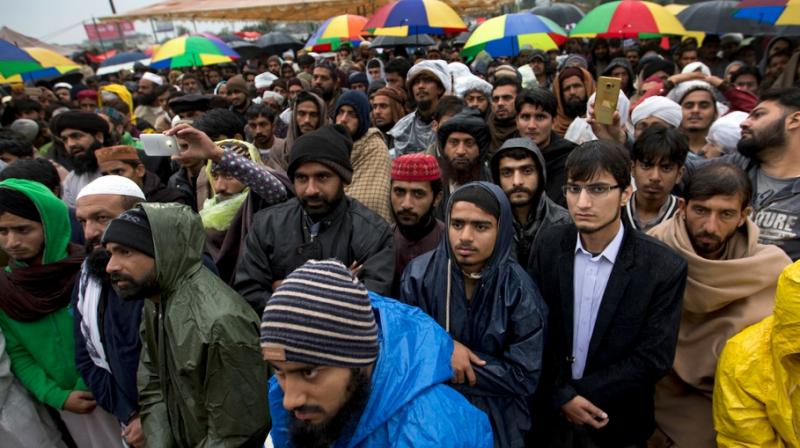 The previously obscure Islamist group has been calling for weeks for Hamid's ousting over a hastily-abandoned amendment to the oath which election candidates must swear. (Photo: AP)

"On the assurance of the Chief of Army Staff, we are calling off the sit-in," Rizvi told a crowd of around 2,500 demonstrators from the Tehreek-i-Labaik Ya Rasool Allah Pakistan (TLY), who have occupied a main highway to the capital since November 6.

His statement came after state media reported that Zahid Hamid had resigned. There was no immediate comment or confirmation from government officials.

The decision to capitulate to the protesters' demands is a major embarrassment for the embattled ruling Pakistan Muslim League-Nawaz (PML-N) as it eyes elections in 2018, analysts said, and underscores the influence of religious groups in the nuclear-armed nation.

The previously obscure Islamist group has been calling for weeks for Hamid's ousting over a hastily-abandoned amendment to the oath which election candidates must swear.

The protesters have linked the amended wording to blasphemy - a highly contentious issue in Muslim Pakistan that has often fuelled violence.

Monday's announcement came after a botched operation on Saturday to disperse the demonstrators sparked violence in Islamabad that left at least seven people dead and hundreds wounded. It fuelled the spread of the protests to major cities across the country including Karachi and Lahore.

The government ordered police and paramilitaries to stand down after the clashes and called on the army to intervene to restore order. By Monday morning, there still had been no official response from the military.

The sit-in has enraged commuters in Islamabad and neighbouring Rawalpindi with hours-long traffic snarls, caused the death of at least one child whose ambulance could not reach hospital in time, and infuriated the judiciary.

Hamid's ousting is the latest in a series of heavy blows to the ruling party.

In July, Nawaz Sharif was deposed as prime minister by the courts over graft allegations, while finance minister Ishaq Dar - also accused of corruption - has taken indefinite medical leave.

"Politically, this is a major embarrassment for the PML-N," analyst Hasan Askari said, warning that it would undermine their credibility and predicting more defections.

He also warned it had strengthened the position of hardline Islamic groups like TLY, whose campaigning in the upcoming elections could further weaken the PML-N. The party has previously benefited from the right-wing religious vote.