The military's sweeping reprisal has left hundreds dead and sent nearly half a million Rohingya refugees fleeing to Bangladesh. 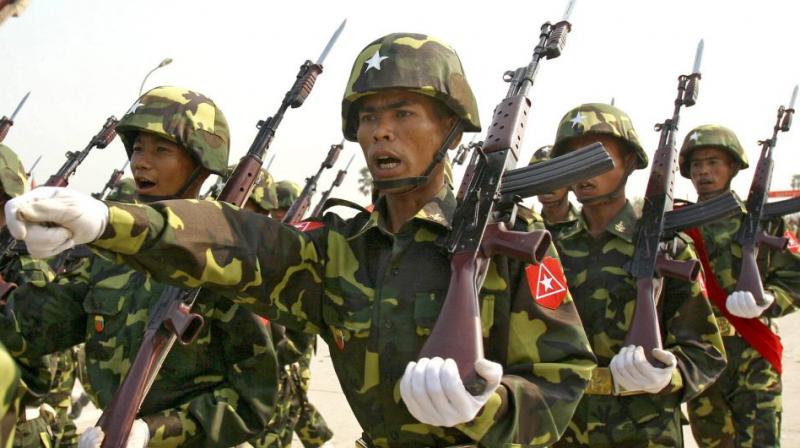 Cox’s Bazaar: Rika Dhar watched as her husband, two brothers and countless neighbours were brutally hacked to death with machetes by masked men who stormed their Hindu village in western Myanmar and frogmarched the terrified inhabitants to the hills.

"After the killing, they dug three large pits and threw them inside. Their hands were still tied behind them and their eyes blindfolded," said 25-year-old Dhar in a Hindu camp inside Bangladesh where she fled with her two children.

Eyewitnesses said the bloodshed occurred outside their small Hindu village in Kha Maung Seik in northern Rakhine state, where Myanmar authorities have exhumed 45 corpses from mass graves since Sunday.

The army said the grim discoveries are evidence of a massacre by Muslim Rohingya militants on August 25, the same day the insurgents launched coordinated raids on police posts that unleashed a surge of communal bloodshed.

The military's sweeping reprisal has left hundreds dead and sent nearly half a million Rohingya refugees fleeing to Bangladesh, where they have described a campaign of army-led violence the UN said amounts to ethnic cleansing.

Myanmar's army has rebuffed the accusation and defended its operation as a proportionate crackdown on the Rohingya "extremist terrorists", while highlighting the plight of other groups, such as Buddhists and Hindus, swept up in the unrest.

On Wednesday the army lifted its tight net over the conflict zone to fly reporters to the area in northern Rakhine where the mass graves of Hindus, including many women and children, were exhumed earlier this week.

It is the first time the military has organised a press trip to the area, where media restrictions have made it difficult to verify a whirlwind of accusations over who is driving the violence.

Displaced Hindus in Bangladesh and Myanmar, unable to contact their families, fear the worst as search efforts continued Wednesday for around 50 other villagers.

Witnesses from Kha Maung Seik, known locally as Fwaira Bazar, said black-clad attackers stormed their community on the morning of August 25, beating and binding the men before driving everyone into the forest.

"After they took us to the hills, they butchered everyone. I saw it with my own eyes," said Promila Sheel, 15, at a small Hindu village in Cox's Bazar near the sprawling Rohingya camps.

She said more than 100 people were killed - including her husband and three other family members. The corpses were unceremoniously dumped in freshly-dug pits, Sheel added.

The latest convulsion of violence has deepened already bitter hatreds between various ethnic groups in Rakhine, where tensions have simmered for years.

The women who survived the massacre did not identify the masked attackers as Muslim militants, but said they were targeted because they were Hindus.

Rohingya sympathetic to the militant cause reject allegations their fighters were responsible for massacring civilians.

In a tent near Kutupalong refugee camp, an alleged Rohingya militant flanked by supporters accused Buddhist mobs of carrying out the attacks and pinning the blame on the fledgling Muslim movement.

"They are just trying to tarnish our image," said the man, requesting anonymity to protect his identity from Bangladesh authorities.

"We never give the moghs (ethnic Rakhine Buddhists) or the non-Muslims a hard time without any valid reason. They are lying to make us look like the bad guys."

But that brings little solace to Modhuram Pal, a Hindu who has not heard from anyone in Kha Maung Seik since escaping with his family to Bangladesh weeks ago.

"I don't know the whereabouts of my relatives and friends in Fwaira Bazar," the 35-year-old told AFP, using the Rohingya name for the village area.

"I heard about the bodies found in the village. God forbid, maybe some of my relatives are in there too."