The March 12 flight from Dhaka crash-landed at Kathmandu airport and skidded into a field where it burst into flames. 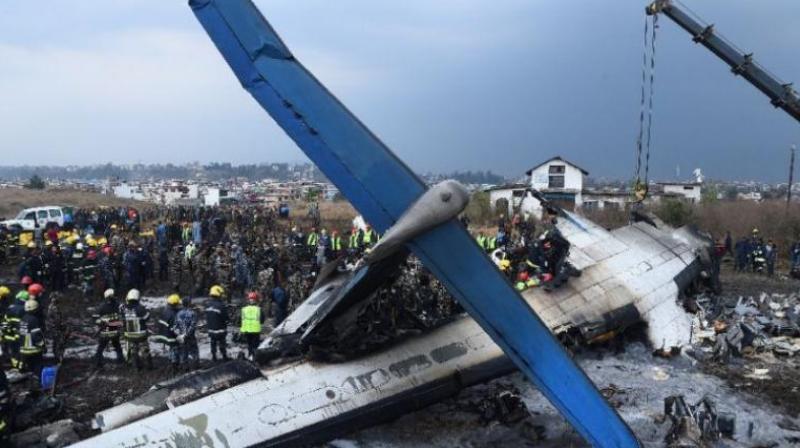 As the Bombardier Dash 8 Q400 turboprop approached the runway it made a last-minute change of direction, failed to sufficiently reduce its speed and did not carry out the necessary landing checks, investigators said. (Photo: AP)

Kathmandu: An investigation into a deadly plane crash at Nepal's international airport has blamed the captain who wept and suffered an emotional breakdown during the flight after his skills had been questioned, according to a draft of the report leaked Monday.

The March 12 flight from the Bangladeshi capital Dhaka crash-landed at Kathmandu airport and skidded into a football field where it burst into flames, killing 51 people in the deadliest aviation accident in the Himalayan nation for decades.

The draft copy of the final investigation report, seen by AFP, concludes the US-Bangla Airlines captain was "under stress and emotionally disturbed" after a female co-worker had "questioned his reputation as a good instructor".

"This mistrust and stress led him to continuously smoke in the cockpit and also suffer an emotional breakdown several times during the flight," it says.

Captain Abid Sultan was "crying and sneezing on several occasions during the flight", it adds.

During the short flight from Dhaka to Kathmandu, Sultan - a former Bangladesh Air Force pilot who was also an instructor for the airline - talked non-stop as he tried to impress upon the junior co-pilot his competence and proficiency.

The captain's constant monologue led to the "total disorientation" of the co-pilot, who was flying the plane when it crashed. Prithula Rashid had only recently qualified and had never previously landed at Kathmandu airport.

Nepal's only international airport lies in a narrow bowl-shaped valley with the Himalayas to the north, making it a notoriously challenging place to land.

As the Bombardier Dash 8 Q400 turboprop approached the runway it made a last-minute change of direction, failed to sufficiently reduce its speed and did not carry out the necessary landing checks, investigators said.

The report revised the final death toll up to 51, including both pilots. Twenty passengers miraculously escaped the burning wreckage but sustained serious injuries.

Conflicting reports that emerged shortly after the crash had suggested confusion between the pilot and air traffic control may have caused the accident.

The report said air traffic control did confuse the two ends of the runway - referred to as 'Runway 02' and 'Runway 20' - but concluded "this had no impact on the flight".

A source at Nepal's Tourism Ministry, which led the probe into the crash, confirmed the authenticity of the draft.

The accident was Nepal's deadliest since September 1992, when all 167 people aboard a Pakistan International Airlines plane were killed when it crashed as it approached Kathmandu airport.