The provincial results show that the PML-N was leading on 129 seats in Punjab followed by PTI with 121 in the provincial Assembly of 299 members. 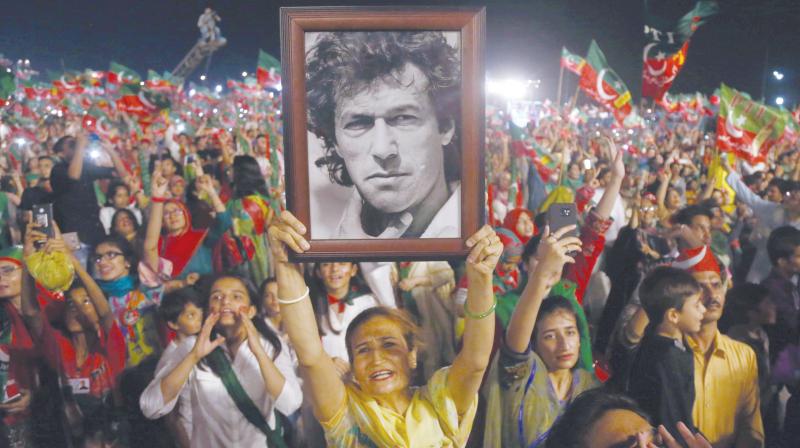 Islamabad: Imran Khan’s Pakistan Tehreek-e-Insaf  (PTI) on Thursday inched closer to becoming the single largest party in the country’s general elections by leading on 119 seats in an early count of votes, out of the 272 seats, amid charges of rigging by rival political parties.

As the results of Wednesday’s polling came in, PTI chief Imran Khan held a series of meetings with his party leaders to discuss the possible formation of the government with independents who are likely to join his party to become ministers in the new government.

In the eastern city of Lahore, capital of Punjab province and the country’s political heartland, PTI supporters rejoiced by waving flags and raising party slogans.

The 65-year-old former cricketer’s PTI was ahead in 119 of 272 contested National Assembly constituencies, while its main rival Pakistan Muslim League-Nawaz (PML-N) was way behind with 62 seats. The Pakistan People’s Party (PPP) was leading on 43 seats while others were ahead in 48 seats.

The PML-N and the PPP, both raised questions on the transparency of the vote counting process, alleging their polling agents were not allowed to verify vote counts as is mandated by law.

Mr Khan addressed the nation in a victory speech from Islamabad, outlining the goals of the government he would be heading, and said, “I thank God, after 22 years of struggle, my prayers have been answered. I have got the chance to fulfil my dream and serve the nation.”

Calling the elections historic, Mr Khan said, “We are witnessing the strengthening of democracy in Pakistan. The election process was completed successfully despite many terror attacks. I thank our security forces.”

Underlining the need for peace and stability, the Prime Minister-in-waiting promised to build a new Pakistan that would be an Islamic welfare state like Medina, referring to the governance system at the time of the Prophet.

He promised to make Pakistan’s institutions stronger and to hold everyone in the government accountable. “First, I will be subjected to accountability, then my ministers and so on. Today, we are behind (other countries) because there is a separate system for those in power and a separate one for ordinary citizens. This will end,” he said.

He also promised to end VIP culture and announced that he would not live in the palatial official house for Prime Ministers.

“Our government will decide what we will do with Prime Minister’s house. I would be ashamed to live in such a large house. That house will be converted into an educational institution or something of the sort,” he said.

Similar other government building like governor houses may be converted into hotels to generate income for Pakistani state, he added.

Identifying the poor as his government’s priorities, Mr Khan said that farmers in Pakistan are not paid for their hard work, 25 million children are out of school, women continue to die in childbirth because the country can’t give them basic healthcare, and people don’t have clean drinking water.

The former cricketer emphasised on the need for the country to get out of its economic crisis and promised to create a new tax culture.

“People will pay taxes because they will see that their taxes are being spent on them. Pakistanis are number one in donating zakat (alms) in the entire Muslim world, but they shirk paying taxes as they feel that these will be spent on luxuries by elected representatives. We will win back people’s trust and will coax them to pay taxes,” he said.

He also reached out to jobless youths and promised to boost they economy by ensuring ease of doing business in Pakistan. “We will ensure ease in doing business in Pakistan,” he said. “We are facing governance and economic challenges. Our economy has never been so abysmal. It’s because institutions have not been doing their jobs. We will change the system in a way which people haven’t seen before. We will help farmers, the business community and help the youth to find jobs and develop their skills,” he said.

Mr Khan also took at the Indian media for attacking him. “I was saddened by the way Indian media recently projected me. I am one of those Pakistanis who want good relations with India, if we want to have a poverty-free subcontinent then we must have good relations and trade ties,” he said.

Pakistan’s National Assembly comprises a total of 342 members, of which 272 are directly elected whereas the rest — 60 seats reserved for women and 10 for religious minorities — are selected later through proportional representation among parties with more than five per cent of the vote. PML-N president Shehbaz Sharif, who was hoping to become the next Prime Minister after the jailing of his brother and former Prime Minister Nawaz Sharif in a corruption case, rejected the election results, alleging “blatant” rigging.

He did not say who he believes could have rigged the polls, but allegations of manipulating the elections have been made against the country’s influential military.

Awami National Party, Muttahida Qaumi Movement-Pakistan , Pak-Sarzameen Party , Muttahida Majlas-i-Amal and Tehreek-i-Labbaik Pakistan alleged that their polling agents were either ousted of the polling stations at the time of counting or denied certified results by the polling staff.

The Election Commission rejected rigging allegations. Chief election commissioner Muhammad Raza Khan said, “These elections were fair and we have not received any complaint. If anyone has proof, we will take action.”

The provincial results show that the PML-N was leading on 129 seats in Punjab followed by PTI with 121 in the provincial Assembly of 299 members.