I was jailed for Bangladesh: Prime Minister Modi

The high-profile visit of PM Modi began on a stormy note, with four supporters of hardline Islamist group Hefazat-e-Islam being shot dead 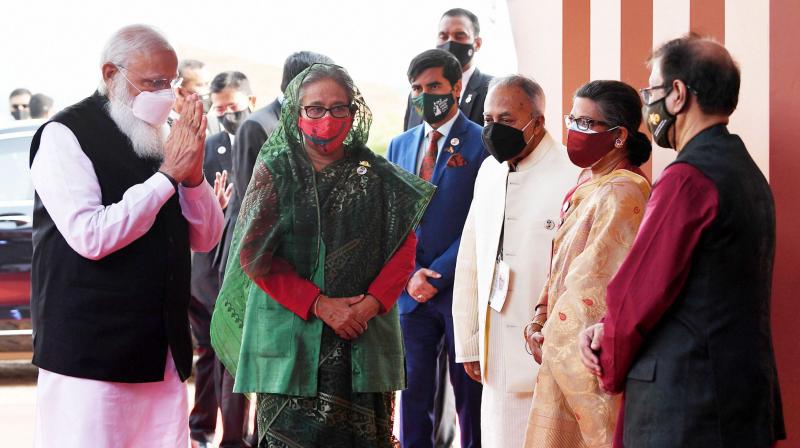 New Delhi/Dhaka:  Addressing Bangladesh's 50th Independence anniversary at the National Parade Square  in Dhaka in the presence of his counterpart Sheikh Hasina on the first day of his two-day visit that began on Friday, Prime Minister Narendra Modi recalled the immense contribution of the founder of Bangladesh Sheikh Mujibur Rahman and the sacrifices made by both the Indian Army and the people of Bangladesh in securing independence from Pakistan. PM Modi also revealed that he had participated in a “Satyagraha” in India in 1971 as a youth in support of Bangladesh’s struggle for independence and had even courted arrest and gone to jail. He recalled the atrocities and heinous crimes committed by the Pakistani Army in 1971 on the people of Bangladesh and said photographs of these did not let people sleep for days.

The high-profile visit of PM Modi began on a stormy note, with four supporters of hardline Islamist group Hefazat-e-Islam being shot dead after violence erupted at Hathazari, a rural town, according to international news agency reports from Dhaka. The four were apparently shot dead during protests being staged by the Islamist group against PM Modi’s visit. Ruhul Amin, the government administrator of Hathazari town, told news agency AFP that upto 1,500 supporters of the hardline group attacked a police station chanting anti-Modi slogans. Other reports said hundreds of protesters also staged protests outside Dhaka’s Baitul Mokarram Mosque to oppose the visit, resulting in clashes and injuries after they attacked the Police.

Meanwhile, in a special gesture, Bangladesh Prime Minister Sheikh Hasina and Ministers from her cabinet welcomed PM Modi at the Hazrat Shahjalal International Airport on his arrival in Dhaka earlier in the day. A salute of 19 guns and Guard of honour were accorded to PM Modi. The Bangladesh PM praised India for its current development partnership and support during the Covid Pandemic and recalled the historic support of India for the liberation of Bangladesh in 1971. She also recalled the horrific assassination nearly 46 years ago of her father and founder of Bangladesh Sheikh Mujib on August 15, 1975, and the killing of several of her family members on that day. Sheikh Hasina was abroad at the time.

Earlier in the day, soon after his arrival in Dhaka, PM Modi visited the National Martyrs’ Memorial (Jatiyo Sriti Shoudho), the National monument of Bangladesh, at Savar, about 35 km north-west of Dhaka  to pay tributes to the valour and the sacrifice of those who gave their lives in the Bangladesh Liberation War of 1971. PM Modi signed the visitor’s book in the monument and wrote, “I pray that the eternal flame at Savar remains a lasting reminder of the noble victory of truth and courage over deceit and oppression.”

Bangladesh is celebrating 50 years of its existence this year and both countries are also celebrating 50 years of establishment of diplomatic relations with each other this year. The Indian armed forces’ victory over Pakistan in the war in December, 1971, had led to the liberation of the erstwhile East Pakistan and the birth of Bangladesh as an Independent nation. The Pakistani Army’s crackdown began in March, 1971, and officially three million people were killed during the nine-month long war. PM Modi’s “historic visit is to celebrate Mujib Borsho- the birth centenary of Sheikh Mujibur Rahman ; 50 years of the establishment of diplomatic ties between India and Bangladesh; and 50 years of Bangladesh’s war of liberation”.

Paying homage to the martyrs of the freedom struggle, PM Modi said, “The photographs showing the atrocities and heinous crimes committed by the Pakistani Army did not let people sleep for days. We will not forget those who secured independence for Bangladesh by sacrificing oceans of blood. We will not forget (their sacrifice). ... Bangabandhu Sheikh Mujibur Rahman emerged as a ray of hope or the people both here and in India.”

PM Modi added, “I must have been 20-22 years of age when I along with several of my colleagues offered a Satyagraha in support of Bangladesh’s struggle for Independence. I courted arrest while supporting the struggle for Bangladesh’s independence and went to jail.” PM Modi also recalled the efforts of the then Indian Prime Minister Indira Gandhi during the Bangladesh liberation war.

PM Modi further said, “I salute the brave soldiers of the Indian Army who stood with the brothers and sisters of Bangladesh in Muktijuddo (liberation war). Those who gave their blood in ‘Muktijuddo’, sacrificed themselves, and played a very big role in realising the dream of independent Bangladesh. This is one of the most memorable days of my life. I am grateful that Bangladesh has included me in this event. I am grateful that Bangladesh has invited India to take part in this function. It is a matter of our pride that we got the opportunity to honour Sheikh Mujibur Rahman with the Gandhi Peace Prize.” India had conferred the prestigious award posthumously on Sheikh Mujib for the year 2020 just ahead of the visit.

PM Modi also praised the leadership of his counterpart Sheikh Hasina and mentioned the rapid strides in development made by Bangladesh under her leadership. He said Bangladesh had proved those wrong who had raised doubts and questioned the identity of Bangladesh. He also spoke about the current strong ties between the two nations, the supply of Indian-manufactured Covid vaccines to Bangladesh and landmark agreements between the two nations such as the Land Boundary Agreement.

“We must remember that we've similar opportunities in fields of trade and commerce, but at the same time, we've similar threats like terrorism. The ideas and powers behind such types of inhumane acts are still active. We must remain vigilant and united to counter them,” PM Modi said, adding that both India and Bangladesh have the power of democracy and vision for the future, and it is necessary for the region the two countries progress together. “That is why Indian and Bangladeshi governments are making meaningful efforts in this direction,” he said.

During the course of the day, he also met met Political leaders from Bangladesh’s ruling 14 Party Alliance and discussed “diverse issues of bilateral relations were held during the meeting to strengthen ties between the two nations”. But he also met met and interacted with opposition leaders from various political parties of Bangladesh. Foreign Minister of Bangladesh, Dr A.K. Abdul Momen also called on PM Modi. Apart from this, PM Modi also met the Community leaders including Representatives of Minorities in Bangladesh, Bangladeshi Mukhtijoddhas (freedom fighters), Friends of India and Youth Icons.

Meanwhile, Bangladesh Police said four bodies of members of Hefazat-e-Islam, a hardline Islamist group, were brought to Chittagong Medical College Hospital after violence erupted at Hathazari, a rural town where the group's main leaders are based. “We got four bodies here. They are all hit with bullets. Three of them are madrasa students and another a tailor,” Alauddin Talukder, a police inspector at the hospital, told news agency AFP. He said at least four other demonstrators were critically injured but did not say who opened fire. Ruhul Amin, the government administrator of Hathazari town, said upto 1,500 supporters of Hefazat attacked a police station chanting anti-Modi slogans. “They attacked us all of a sudden," he said, without confirming whether any protesters were killed. Hathazari is home to one of Bangladesh's largest madrasas and is the headquarters of the Hefazat, which was formed in 2010 and is believed to be the country's largest hardline Islamist outfit.

According to other international news agency reports, by Friday afternoon, hundreds of protesters had also gathered outside Dhaka’s Baitul Mokarram Mosque after which violent clashes broke out after one faction of protesters began waving their shoes as a sign of disrespect to PM Modi, while another group tried to stop them. Protesters reportedly threw stones at the police, who were heavily present on the streets near the Mosque.