Ningbo is one of the country's major international container shipping ports. 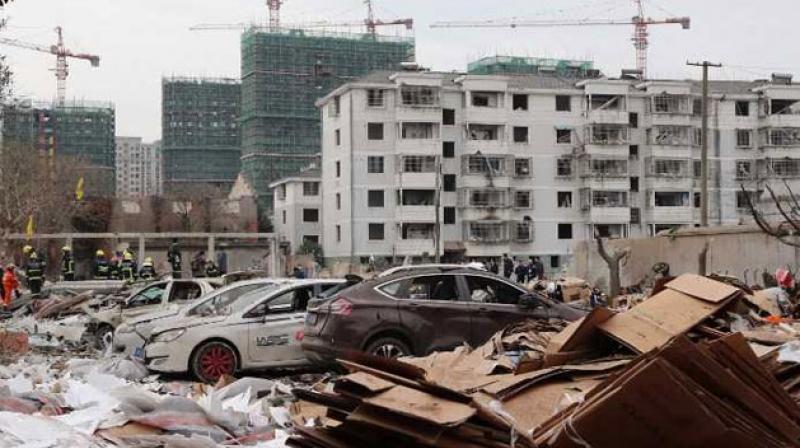 The Ningbo government said on a social media account that the blast occurred in a "vacant lot" but gave no details about what may have caused it.

Local authorities said two people died, two were seriously injured and an unidentified number were being treated for lesser injuries.

State media said more than 30 people were taken to hospital. The Xinhua news agency said the explosion happened in a demolished factory at around 9:00 am (0100 GMT).

Another statement later by the city's Jiangbei district, the scene of the blast, said 16 people were still being treated for minor injuries while an undisclosed number had left hospital.

Industrial accidents are common in China, where safety standards are often lax.

Television images showed cars twisted and mangled by the force of the explosion, a plume of grey smoke rising in the sky, and debris scattered for dozens of metres around the site of the incident.

Aerial images posted by the People's Daily on Twitter showed at least four wrecked buildings around a wasteland of concrete debris.

Footage showed helmeted rescuers carrying injured people away from the area, while others stood over a person lying on the ground.

Pieces of concrete, wood and glass were strewn across a wide area. Metal gates were twisted open and windows blown out of buildings.

According to CCTV, eyewitnesses said there were "a large number of injured people" in the city, one of China's largest ports which sits just south of Shanghai.

The Communist Party's People's Daily said on Twitter that no one lived at the scene of the explosion but garbage collectors might have been working there.

An inquiry has been launched to determine the cause of the explosion, the local police in Jiangbei district said on social media.

Ningbo is one of the country's major international container shipping ports.

China has been rocked by several industrial accidents in recent years.

In 2015 giant blasts killed at least 165 people in the northern port city of Tianjin, causing over $1 billion in damage and sparking widespread anger at a perceived lack of transparency over the accident's causes and its environmental impact.

A government inquiry into the Tianjin accident released in February 2016 recommended 123 people be punished.

The official who was mayor at the time of the accident was sentenced to 12 years in prison for graft in September.