China currently holds the Presidency of the BRICS and is due to hold 2017 summit of the five-member group in September at Xiamen city. 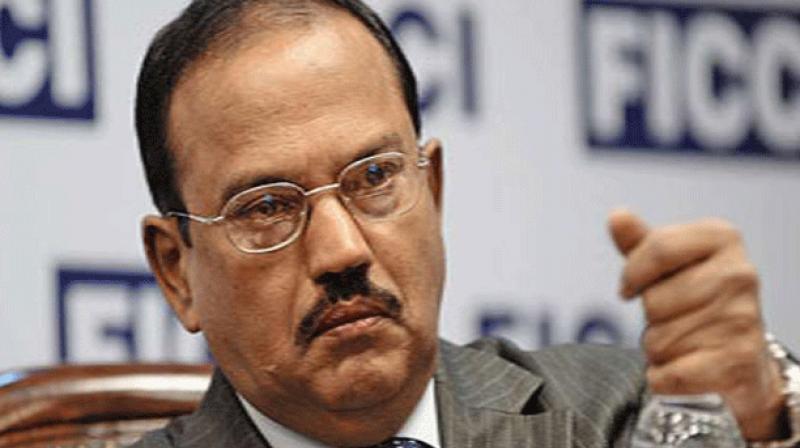 Doval is expected to visit Beijing on July 26 to attend the meeting of the NSAs. (Photo: PTI/File)

Beijing: Amid the Sikkim standoff, National Security Advisor Ajit Doval will call on Chinese President Xi Jinping on Friday along with fellow top security officials of the BRICS countries.

Officials confirmed that Doval, who will be taking part in the Brazil, Russia, India, China, South Africa (BRICS) NSAs meeting in Beijing, will be also meeting President Xi.

The group of NSAs would call on the Chinese President for an interaction on security issues relating to BRICS countries.

China currently holds the Presidency of the BRICS and is due to hold 2017 summit of the five-member group in September at Xiamen city.

Ahead of his meeting with Xi, Doval is expected to hold separate talks with China’s State Councilor Yang Jiechi to discuss resolution of the standoff at Doklam in Sikkim sector.

Both Doval and Yang are Special Representatives of the India-China border mechanism.

China on Tuesday had reiterated that no meaningful dialogue can be held with India until it "unconditionally" withdraws troops from the disputed Dokalam area and said Foreign Minister Wang Yi has authoritatively made Beijing’s position clear on the issue.

Wang, who is the first top Chinese leader to have commented so far on the Dokalam impasse, on Tuesday, claimed that India "admitted" to entering Chinese territory. He said that India should "conscientiously withdraw" its troops from the area.

"The remarks of Foreign Minister Wang Yi are authoritative and have made our position clear. I don’t have anything to explain," Chinese Foreign Ministry spokesman Lu Kang told a media briefing.

Lu, however, declined to react to reports that both sides have deployed over 3,000 troops each at Dokalam, saying that the question should be referred to the Chinese Defence Ministry.

He once again said China will not hold any meaningful dialogue without Indian troops withdrawal.

"I have stressed many times that the crux of this incident is that the Indian border troops illegally trespassed into China’s territory and the solution as Wang put it is for Indian border troops to pull-out unconditionally. This is a precondition basis for any meaningful talks between the two countries," Lu said.

The Dokalam issue is expected to be discussed during the visit of Indian National Security Adviser Ajit Doval to Beijing for a meeting of the NSAs of BRICS countries - Brazil, Russia, India, China and South Africa - on July 27-28.

China hopes that this meeting will help safeguard the common interests of the BRICS countries, move forward political and security cooperation and strengthen the solidarity and influence of the group, Chinese Foreign Ministry spokesman Lu Kang had said on Monday.

Chinese and Indian soldiers have been locked in a face- off in Dokalam area in the southernmost part of Tibet in an area also claimed by Indian ally Bhutan for over a month after Indian troops stopped the Chinese army from building a road in the disputed area.

China claimed it was constructing the road within its territory, and has been demanding immediate pull-out of the Indian troops.

But External Affairs Minister Sushma Swaraj told Parliament last Thursday that both sides should first pull back their troops for any talks to take place, favouring a peaceful resolution of the border standoff.