In talks with India over Mansarovar pilgrimage issue: China

The pilgrims were scheduled to cross over to the Chinese side on June 19 but had failed to do so due to inclement weather. 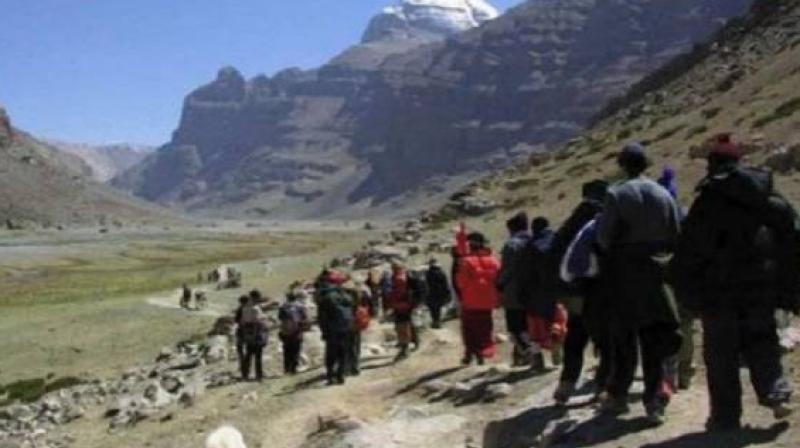 The Chinese officials said they were concerned about the safety of the Indian pilgrims which is why they were stopped from proceeding further. (Photo: PTI)

Beijing: China on Monday said it was in talks with India over the denial of entry to 47 Indian pilgrims who were scheduled to travel to Kailash Mansarovar in Tibet through the Nathu-la pass in Sikkim.

"According to my information, the two governments are in touch over this issue," Chinese Foreign Ministry spokesman Geng Suhang told reporters, declining to elaborate whether it was due to any weather-related issues like landslides and rains the Pilgrims were stopped by the Chinese officials at the Sino-India border.

He said the issue was being discussed by the two foreign ministries. China last week refused entry to 47 Indian pilgrims who were scheduled to travel to Kailash Mansarovar through the Nathu La pass in Sikkim.

The pilgrims were scheduled to cross over to the Chinese side on June 19 but had failed to do so due to inclement weather. They had waited at the base camp and tried to cross again on June 23 but were denied permission by the Chinese officials.

In New Delhi, External Affairs Ministry Spokesperson Gopal Baglay had said that some difficulties were being experienced in the movement of pilgrims through Nathu La and that India is taking up the matter with China.

The development has cast a shadow of uncertainty on the annual yatra as Chinese officials maintained that it would take some time to repair the roads and the Indians would not be able to make the pilgrimage any time soon.

The Chinese officials said they were concerned about the safety of the Indian pilgrims which is why they were stopped from proceeding further.

The pilgrims, who were stopped by the Chinese officials at the border from proceeding further, have now returned to their respective states. Hundreds of Indian pilgrims undertake Kailash Mansarovar yatra in the Tibetan Autonomous Region of China every year negotiating the mountainous terrain.

This year, a total of 350 yatris had registered for the yatra via Nathu La route and they were to travel in seven batches. The denial of permission to the first batch of 47 Indian pilgrims was a surprise as the Kailash Mansarovar Yatra through the new route via Nathula Pass in Sikkim was launched with a fanfare by the two countries in 2015.

This was the second route agreed by the two counties for the Kailash Yatra.
Till 2015, the Yatra was being organised by External Affairs Ministry only through Lipu Pass in Himalays connecting the Kumaon region of Uttarakhand in India with the old trading town of Taklakot in Tibet.

The Nathulla route enabled pilgrims to travel 1500 km long route from Nathulla to Kailash by buses. The route through Nathula reduced the hardship and journey time enabling many more pilgrims, in particular aged pilgrims, to undertake the Yatra.

The development comes amid tensions in bilateral ties between the two countries over a host of issues including the CPEC and India's NSG bid. Earlier this month, Prime Minister Narendra Modi had met Chinese President Xi Jinping on the sidelines of the Shanghai Cooperation Organisation (SCO) Summit in Kazakh capital Astana.

In the meeting Modi had said the two sides should tap their potential in cooperation, strengthen communication and coordination in international affairs, respect each other's core concerns and appropriately handle their disputes.