Kulbhushan Jadhav, who was sentenced to death for 'espionage' by Pakistan military, met his mother Avanti and wife Chetankul on Monday. 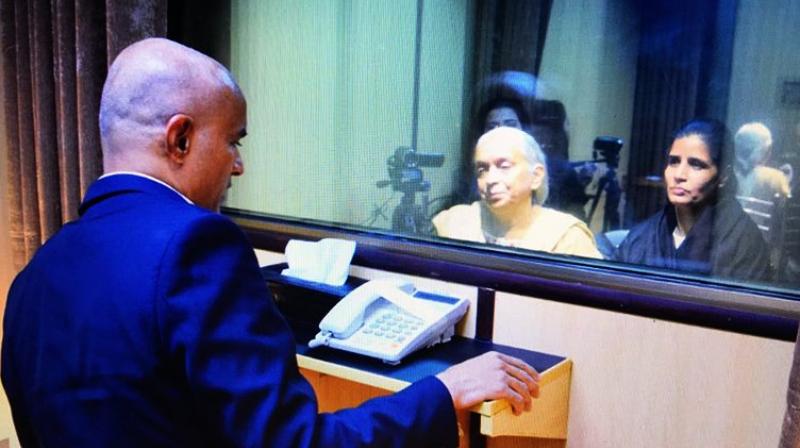 'Jadhav is the face of Indian terrorism in Pakistan' but still his family was allowed to meet on humanitarian and Islamic grounds, Faisal claimed. (Photo: ANI | Twitter)

Islamabad: "It is not the last meeting," said Pakistan after Indian national Kulbhushan Jadhav spoke to his wife and mother from behind a glass barrier in Islamabad on Monday.

Jadhav, who was sentenced to death for 'espionage' by Pakistan military, met his mother Avanti and wife Chetankul on Monday afternoon.

After their meeting, Foreign Office spokesperson Dr Mohammad Faisal addressed the media and repeated its old allegations against Jadhav. He also clarified that his meeting with his family in the presence of an Indian diplomat did not constitute "consular access".

"This meeting was not consular access as we had told India that its diplomat would see the meeting but was not allowed to speak or participate in it," Faisal told reporters.

India's Deputy High Commissioner JP Singh, who accompanied the visitors, was not allowed to speak or listen to the conversation of meeting and he knew it, Faisal added.

"All decision on consular access will be taken on basis of law and interests of Pakistan," he said in response to a question about granting the consular access.

Pakistan has repeatedly denied India consular access to Jadhav on the ground that it was not applicable in cases related to spies.

The Foreign Office also issued a new video message of Jadhav in which he is seen thanking the Pakistan government for arranging a meeting with his wife and mother.

The video played during the press conference was recorded before Jadhav's meeting with his family, officials said.

"I requested a meeting with my wife and mother and I am thankful to Government of Pakistan for this gesture," Jadhav said in the brief video message.

The Foreign Office earlier released pictures of Jadhav talking to his wife and mother from behind a glass screen. The communication between them was through an intercom device.

"We promised 30 minutes of the meeting but Jadhav and his mother requested towards the end of meeting that it should be increased and we did it. The meeting went on for 40 minutes," the spokesperson said.

He said that the meeting was positive and the two sides talked thoroughly. "It is not the last meeting. It should be categorically registered," he added.

Faisal also said that the family was told several days before the meeting that there would not be any physical contact. The family and Indian government knew about it.

He said the meeting was not connected to the International Court of Justice (ICJ) case and Pakistan had already responded to the ICJ on December 13.

"Jadhav is the face of Indian terrorism in Pakistan" but still his family was allowed to meet on humanitarian and Islamic grounds, Faisal claimed.

Faisal said that since Pakistan has allowed Jadhav's family to meet him, India should also allow the families of detained Kashmiris to meet their relatives.

He said Pakistan wanted that Jadhav's family should be allowed to meet the Pakistani and Indian media. But India requested that media should not be allowed to speak to family.

"We wanted to know why he was using fake passport and use it to enter India at least 17 times. We also wanted to know about the family getting pension if he was retired as India says," the spokesman said.

Faisal said that the wife and mother of Jadhav "thanked Pakistan, FO and our team for the meeting while going away."

He alleged that Jadhav was sentenced to death due to his involvement in terrorism.

In his mercy petition filed to the Army chief in June, Jadhav admitted his involvement in various militant activities in Balochistan and Sindh.