Xi, 64, is currently required by the country's constitution to step down as president after two five-year terms. 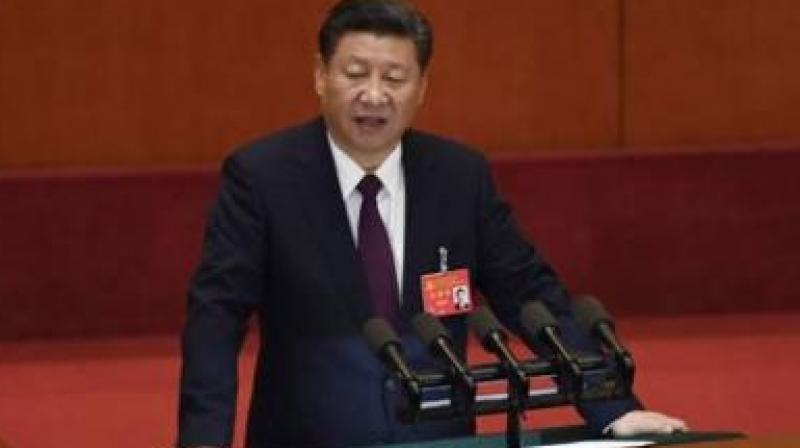 Nearing the end of his first term, Xi Jinping will be formally elected to a second at the annual meeting of China's largely rubber-stamp parliament opening on March 5. (Photo: File)

Beijing: China's ruling Communist Party on Sunday set the stage for President Xi Jinping to stay in office indefinitely, with a proposal to remove a constitutional clause limiting presidential service to just two terms in office.

Xi, 64, is currently required by the country's constitution to step down as president after two five-year terms. Nearing the end of his first term, he will be formally elected to a second at the annual meeting of China's largely rubber-stamp parliament opening on March 5.

The announcement, carried by state news agency Xinhua, gave few details. It said the proposal had been made by the party's Central Committee, the largest of its elite ruling bodies. The proposal also covers the vice president position.

"The Communist Party of China Central Committee proposed to remove the expression that the President and Vice-President of the People's Republic of China 'shall serve no more than two consecutive terms' from the country's Constitution," Xinhua said.

The Central Committee also proposed inserting "Xi Jinping Thought on Socialism with Chinese Characteristics for a New Era" into the constitution, Xinhua said in a separate report, referring to Xi's guiding political thought that is already in the arguably more important Communist Party constitution.

Constitutional reform needs to be approved by parliament. That is stacked with members chosen for their loyalty to the party, meaning the reform will not be blocked.

There has been persistent speculation that Xi wants to stay on in office past the customary two five-year terms.

One of his closest political allies, former top graft buster Wang Qishan, stepped down from the party's Standing Committee - the seven-man body that runs China - in October.

Aged 69, Wang had reached the age at which top officials tend to retire. But he has been chosen as a parliament delegate in 2018 and is likely to become vice president, sources with ties to the leadership and diplomats say.

The move is significant because if Wang does not retire, that could set a precedent for Xi to stay on in power after he completes the traditional two terms in office.

However, the role of party chief is more senior than that of president. At some point Xi could be given a party position that also enables him to stay on as long as he likes.