Pak’s foreign ministry condemned 'unilateral action', saying it had targeted an Afghan refugee camp, but made no mention of casualties. 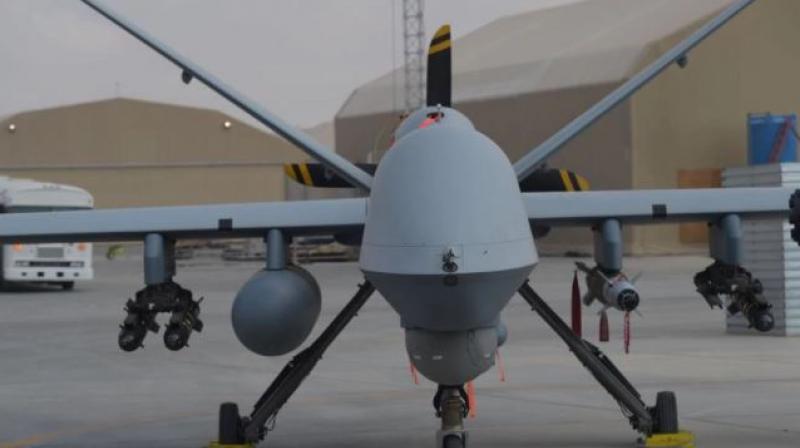 The drone strike killed a mid-level commander from the Taliban-affiliated Haqqani network, according to local officials.(Photo: AFP )

Islamabad: Pakistan’s claim that the US hit an Afghan refugee camp in a drone strike is “false”, a US spokesman said on Thursday, as tensions between the uneasy allies ratchet higher over Islamabad’s alleged support for militants.

The drone strike, which took place well inside Pakistani territory on Wednesday, killed a mid-level commander from the Taliban-affiliated Haqqani network, local officials and a source close to the Islamist group said.

Pakistan’s foreign ministry condemned the “unilateral action” late Wednesday, saying it had targeted an Afghan refugee camp, but made no mention of casualties.

“The claim in (a foreign ministry) statement yesterday that US forces struck an Afghan refugee camp in Kurram Agency yesterday is false,” a spokesman for the US embassy in Islamabad said.

Local officials have told AFP that the pre-dawn strike took place more than 50 kilometres (30 miles) from the Afghan border, in the village of Mamuzai in Kurram district in Pakistan’s semi-autonomous tribal region, where militants once operated with impunity.

The foreign ministry did not elaborate on the nature of the “refugee camp”.

A spokesman for the UN refugee agency has told that there are no refugee camps in the tribal areas, and no sign of a camp can be seen in pictures from the site.

Local officials also told AFP they were not aware of a refugee camp in the area.

Pakistani officials doubled down on the claim during a regular foreign office briefing Thursday, with a spokesman insisting there are two camps in the area, and that the drone hit one of them.

“Pakistan condemned the drone strike in Kurram Agency carried out by the Resolute Support Mission (RSM) yesterday, which targeted an Afghan refugee camp,” the spokesman said.

“Pakistan has also been stressing the need of early repatriation of Afghan refugees, as their presence in Pakistan helps Afghan terrorists to melt and morph among them.”

Nearly 1.4 million Afghan refugees remain in Pakistan, according to UNHCR figures. Unofficial estimates suggest a further 700,000 undocumented refugees could be in the country.

After Washington froze aid to Pakistan worth almost USD 2 billion this month, Islamabad set a deadline of January 31 for all the refugees to return to Afghanistan. Such deadlines have been repeatedly extended in the past.

The US and Afghanistan have long accused Pakistan of ignoring or even collaborating with groups that attack Afghanistan from havens inside Pakistan, a claim Islamabad denies.

The aid freeze, designed to force Pakistan’s military and intelligence apparatus to cut support for Islamist groups, had sparked speculation that the US could resume drone strikes or launch operations along Pakistan’s border with Afghanistan.

Following the freeze, the Pakistani military said US Central Command had assured them Washington “is not contemplating any unilateral action” inside Pakistan.

The freeze has cooled relations between the ostensible allies and prompted indignation in Pakistan, which says the US does not recognise the thousands of lives it has lost and billions it has spent battling extremism.