A new bomb was found in downtown area of Colombo, the capital of Sri Lanka, on Wednesday, after multiple blasts shook the country on Sunday. 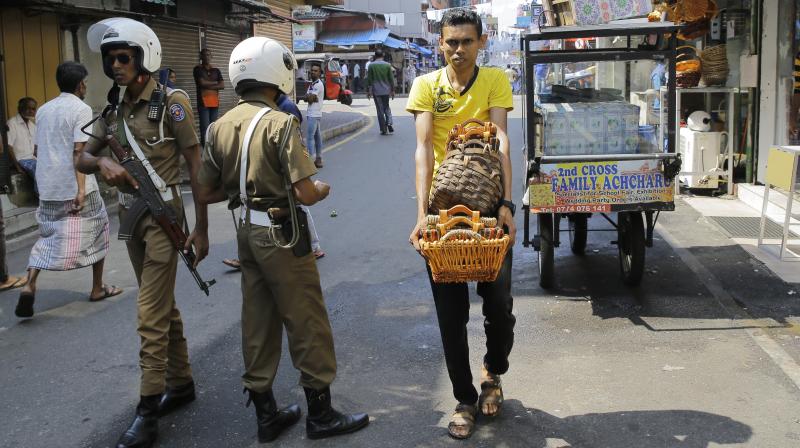 Local police officers have detonated the bomb and removed the motorbike. (Photo:AP)

Colombo: A new bomb was found in downtown area of Colombo, the capital of Sri Lanka, on Wednesday, after multiple blasts shook the country on Sunday.

According to a local security guard of a shopping mall, who has witnessed the whole event, a bomb was found hid in a motorbike, and fortunately, no causalities were reported.

"I see early morning six o'clock, I don't know, after police come, check and ask if I see and what time is it? Yeah, I see, six o'clock, the army come to check, one bomb," he said.

Local police officers have detonated the bomb and removed the motorbike.

On the same day, China's ambassador to Sri Lanka Cheng Xueyuan held a press briefing to introduce the latest situation about Chinese citizens wounded in blasts.

Till now there are one Chinese citizen confirmed to be killed in the attacks, four feared dead, one still missing, and five injured, the Chinese ambassador told the Chinese media at his latest briefing.

Of the five injured Chinese citizens, four have been released from hospital, with one still undergoing treatment, he added.

The Chinese embassy has been trying all means to help the Chinese victims, working with the Sri Lankan side to search for the missing one, giving the injured proper medical treatment, and assisting the family of the deceased to take care of the relevant issues, Cheng said.

The eight suicide bombing attacks in Sri Lanka on Sunday have killed at least 359 people and injured over 500. The Sri Lankan police have taken 58 suspects in custody.