Nothing left: Govt bulldozes Rohingya villages, genocide evidence along with it

‘When you see the pictures, it’s clear that whatever was left -- the mosques, the cemeteries, the homes -- they’re gone.’ 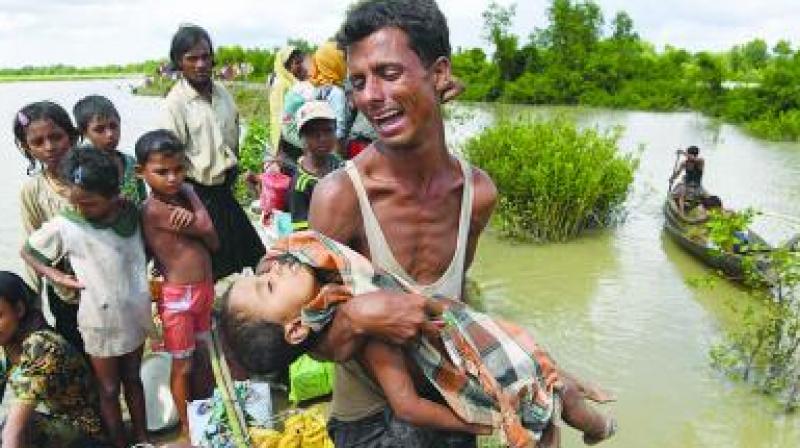 The Rohingya believe the government is intentionally eviscerating the remnants of their culture to make it nearly impossible for them to return. (Representational Image)

Yangon: Myanmar’s government is using bulldozers to erase dozens of villages in Rakhine state in a vast operation that rights groups say is destroying evidence of mass atrocities against the ethnic Rohingya Muslim minority.

The villages were all set ablaze in the wake of violence in August 2017, when a clearance operation drove hundreds of thousands of Rohingya into exile in Bangladesh.

While Myanmar’s government claims it is simply trying to rebuild a devastated region, the operation has raised concern among human rights advocates, who say the government is destroying scores of crime scenes before any credible investigation. The Rohingya believe the government is intentionally eviscerating the remnants of their culture to make it nearly impossible for them to return.

One displaced Rohingya woman said she recently visited her former home in Myin Hlut and was shocked by what she saw. Most houses had been torched last year, but now, “everything is gone, not even the trees are left”, the woman, named Zubairia, said. “They just bulldozed everything ... I could hardly recognise it.”

The 18-year-old said other homes in the area that had been abandoned but not damaged were also flattened. “All the memories that I had there are gone,” she said. “They’ve been erased.”

Myanmar’s armed forces are accused not just of burning Muslim villages with the help of Buddhist mobs, but also of carrying out massacres, rapes and widespread looting. The latest crisis in Rakhine state began in August after Rohingya insurgents launched a series of unprecedented attacks on security posts.

Aerial photographs of the damage were first made public on 9 February when the European Union’s ambassador to Myanmar, Kristian Schmidt, posted images taken from an aircraft of what he described as a “vast bulldozed area” south of the town of Maungdaw.

Satellite imagery from DigitalGlobe indicates at least 28 villages or hamlets were destroyed in a 50km radius around Maungdaw between December and February. On some of the cleared areas, construction crews had erected new buildings and helipads. A similar analysis by Human Rights Watch on Friday said at least 55 villages had been affected.

The government has spoken of plans to rebuild the region for months, and it has been busily expanding roads, repairing bridges, and constructing shelters, including dozens at a large transit camp at Taungpyo, near the Bangladesh border. The camp opened in January to house returning refugees; but none have arrived and Rohingya have continued to flee.

Myanmar’s parliament has also approved a USD 15m budget to build a fence and related projects along the Bangladesh border in Rakhine state, from which about 700,000 Rohingya have fled since August. Deputy home affairs minister General Aung Soe testified on Thursday that fences covering 202km of the 293km border had already been completed.

Myint Khine, a government administrator in Maungdaw, said some of the new homes were intended for Muslims. Many Rohingya fear authorities are seizing land they’ve lived on for generations.

One list, published by the government in December, indicated 787 houses but only 22 were slated for “Bengalis” – the word Myanmar nationalists often use to describe the Rohingya, who they say are illegal migrants from Bangladesh.

Myint Khine denied an ulterior motive. “Of course we have been using machines like earth removers and bulldozers because we have to clear the ground first before building new houses,” he said.

Chris Lewa, whose Arakan Project monitors the persecuted Muslim minority’s plight, said: “How will they identify where they lived, if nothing is left, if nothing can be recognised?

“Their culture, their history, their past, their present – it’s all being erased. When you see the pictures, it’s clear that whatever was left – the mosques, the cemeteries, the homes — they’re gone.”

“Everything is wiped away, and this is very concerning, because these are crime scenes,” he said. “There’s been no credible investigation of these crimes. And so, what we’re talking about really is obstruction of justice.”