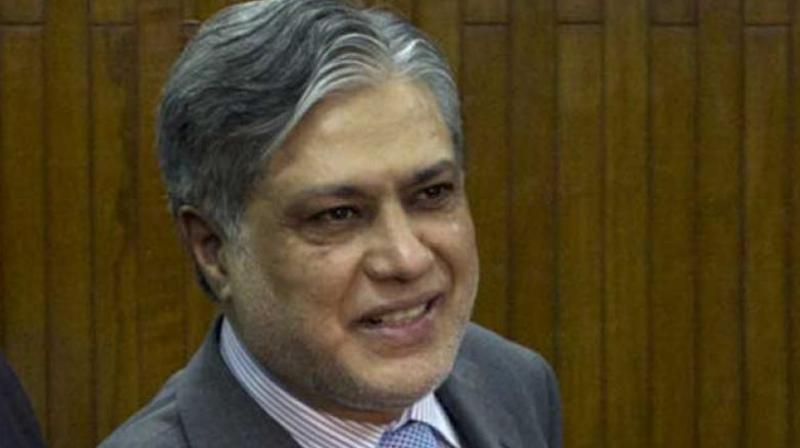 Dar was indicted on September 27 in a corruption case linked to the Panama Papers case, but he continued to serve as finance minister amid strong criticism from Opposition parties. (Photo: AFP)

Islamabad/London: Pakistan's embattled Finance Minister Ishaq Dar has been relieved of his duties after the ailing politician, declared a proclaimed absconder by a court in the Panama Papers case, requested leave for three months.

Dar, 67, had arrived in London in October and has been seeking treatment of an undefined heart complication at a Harley Street hospital.

He can avail a maximum of three-month leave and should resume duty by February 21 otherwise he could be permanently relieved of charge, according to rules.

However, sources said that the development may eventually bring to an end Dar's almost four-and-a-half-year stint as the finance minister.

Dar sent a three-page letter to the Prime Minister's Office on Monday seeking leave of absence. In it, he narrated his health condition, saying that his surgeon had asked him to avoid international air travel.

In his letter to Prime Minister Shahid Khaqan Abbasi, Dar said that he wishes to seek "relief for now from looking after the three divisions" that he has been heading for nearly four years.

"The prime minister has been pleased to allow leave of absence to Ishaq Dar... with immediate effect," said one of the notifications issued by the Cabinet Secretariat.

The second communique announced the decision to withdraw the portfolios of Finance and Economic Affairs Division from Dar.

Prime Minister Abbasi will look after the finance minister's duties until a replacement is found.

In his letter, Dar said that he had been running the affairs of the ministry via email, WhatsApp etc since October 27, and asked for leave without pay.

Dar was indicted on September 27 in a corruption case linked to the Panama Papers case, but he continued to serve as finance minister amid strong criticism from Opposition parties.

Dar is accused of amassing assets of an approximate value of Rs 831.7 million disproportionate to his known sources of income.

Dar had assumed the responsibilities of Minister for Finance, Revenue, Economic Affairs, Statistics and Privatisation in the Cabinet of ousted prime minister Nawaz Sharif in June 2013.

He continued as the Minister for Finance, Revenue and Economic Affairs in the Cabinet of Abbasi but the new premier separated Statistics and Privatisation from the Finance Ministry.

Dar's son is married to a daughter of Sharif.

The National Accountability Bureau had registered three cases of corruption and money laundering against Sharif, his family members, and Dar in the Islamabad Accountability Court, weeks after the Supreme Court order ousted Sharif.

Dar had advised Abbasi to constitute an advisory committee to look into economic issues in his absence.

The likely members of the economic advisory committee suggested by Dar include Shaukat Tarin, who served as finance minister under the PPP government, and Dr Ishrat Husain, who was governor of the State Bank during the regime of Pervez Musharraf regime.

Earlier, the Senate Standing Committee on Finance had also made a similar demand.