Gokhale met Wang, who is also the State Councillor, a high-level post in the hierarchy of the ruling Communist Party of China. 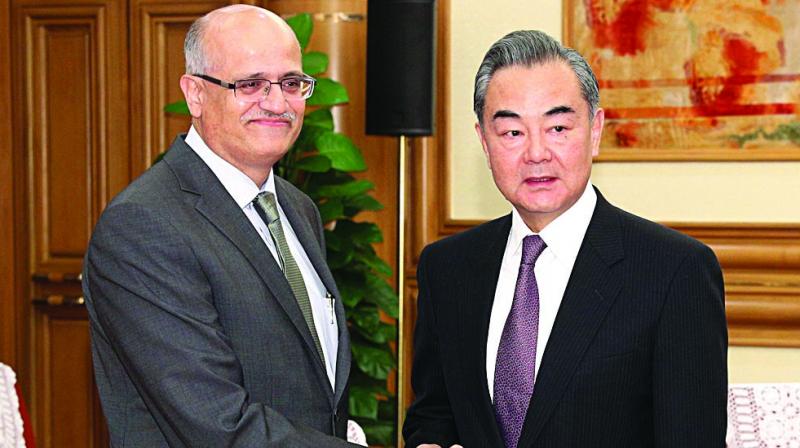 Mr Gokhale’s visit for bilateral consultations is taking place amid renewed optimism that the vexed issue of listing of Pakistan-based Jaish-e-Muhammed (JeM) chief Masood Azhar as a global terrorist by UN, which has been stalled by China, is headed for a resolution in the coming weeks.

Mr Gokhale met Wang, who is also the State Councillor, a high-level post in the hierarchy of the ruling Communist Party of China (CPC), at the sprawling Zhongnanhai complex, the seat of power of China as it houses the offices and residences of the country’s top leaders.

“As your excellency said we will work together with the Chinese side to deepen understanding to strengthen trust to implement the decisions that are taken by the leaders and to do it in a manner in which we are sensitive to each other’s concerns,” he said. One of the issues that was expected to figure during this round of talks was China’s continued attempts to block efforts to list JeM chief Azhar as global terrorist by the UN.

China blocked Azhar’s designation for the fourth-time recently stalling efforts by the US, the UK and France move at the 1267 UN counter terrorism committee following the February Pulwama terrorist attack.  It was the first technical hold put up by China post Wuhan summit.

Also, India continues to have strong reservations to join China’s mega Belt and Road Initiative (BRI) due to its objections over the China-Pakistan Economic Corridor (CPEC) as it is being laid through Pakistan-occupied Kashmir. Both the issues have become major irritants in the bilateral ties. In order to counter China’s technical hold in the 1267 committee, the US, the UK and France have taken the Azhar issue to the UN Security Council (UNSC), which Beijing firmly opposed.