Sartaj Aziz claimed that Pakistan is maintaining minimum nuclear deterrence for peace and stability in the region. 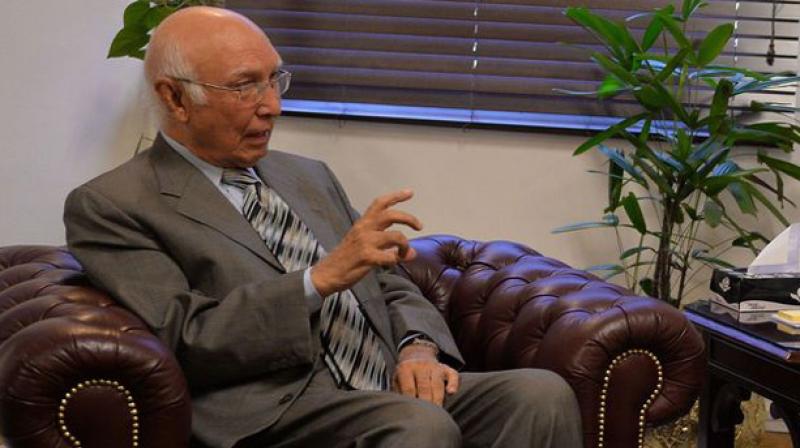 "There is need for credible minimum deterrence as instability has consequences with far more dangers," he said while addressing an international conference on 'Strengthening Peace and Cooperation in South Asia: Incentives and Constraints' organised by Islamabad Policy Research Institute.

Aziz claimed that Pakistan is maintaining "minimum nuclear deterrence" for peace and stability in the region and called upon the international community to desist from policies and actions that undermine strategic stability in South Asia.

He stated that supply of weapon systems widens the existing conventional capabilities in the region.

Aziz regretted that the world has not fully recognised the dangers posed to the peace and stability in the region.

On the Kashmir issue, Aziz was quoted as saying by Radio Pakistan that, "India was responding to indigenous struggle of Kashmiris for their right of self-determination by denial and illusion."

He criticised India for terming the "Kashmiri struggle" as terrorism and declaring Jammu and Kashmir as an integral part.

"India must understand ground realities and recognise the indigenous nature of right to self-determination movement" in Kashmir, he was quoted as saying.

Aziz said during negotiations with India, Pakistan would continue to seek normalisation of relationship and promoting steps that would pave the way for settlement of all lingering disputes including the core dispute of Jammu and Kashmir.

On the NSG issue, Aziz called for criteria-based and non-discriminatory approach for the membership of the Nuclear Suppliers Group (NSG), asserting that otherwise it will affect the strategic stability in the region.

He said Pakistan's application for NSG membership should be evaluated on the basis of fair criterion.