Facebook spokeswoman said that the move was in line with its policy of prohibiting violent groups from its site. 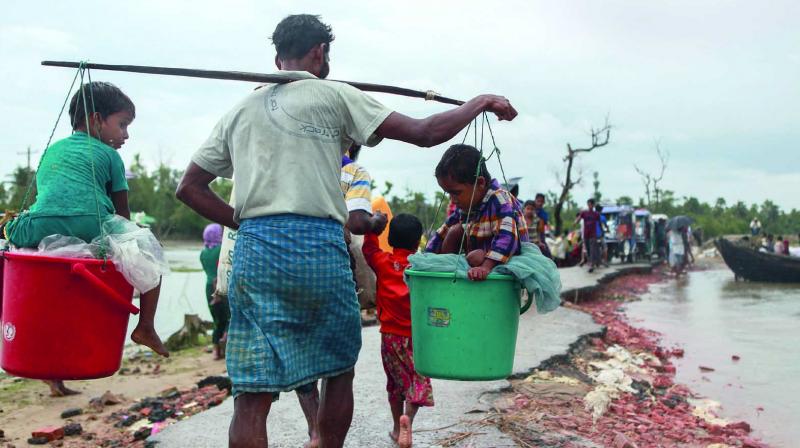 Over 400,000 Rohingya Muslims have fled Myanmar’s Rakhine state into Bangladesh in the 15 days since new violence erupted. (Photo: AFP)

Rangoon: Facebook said it has banned a Rohingya militant group from its site, designating it a 'dangerous organisation' as information on the deepening crisis is muddied by claims, counter-claims and hate speech on social media.

The social network is a key tool in the information war taking place over violence in Myanmar's Rakhine state, which has driven more than 420,000 Rohingya Muslims from the country and sparked UN accusations of military-led "ethnic cleansing".

Rohingya activists have used the platform to post alleged scenes of brutality from the conflict zone, where humanitarian and media access is severely restricted, while the army and government deliver near-daily updates on the crisis.

A Facebook spokeswoman told AFP late Wednesday it was not requested by the government to bar the Arakan Rohingya Salvation Army (ARSA), which remains active on Twitter.

The spokeswoman added that the move was in line with its policy of prohibiting violent groups from its site.

The latest violence in Rahkine erupted after a series of deadly ARSA attacks on military posts in August.

The army has been blamed for launching a crackdown in response that has forced hundreds of thousands of Rohingya Muslims, along with ethnic Rakhine Buddhists and Hindus, into neighbouring Bangladesh.

The spokeswoman said Facebook was aware that Rohingya activists were using the site to draw attention to the violence, and that it intended to allow non-graphic content to remain online.

Myanmar's de facto leader Aung San Suu Kyi has played down claims of atrocities and blamed "a huge iceberg of misinformation" for complicating the conflict.

She has faced mounting criticism from global leaders over what the United Nations has called a "textbook example of ethnic cleansing" against Rohingya Muslims.

Britain sent back five Myanmar army officers from a training session this week, "on account of the current situation in Rakhine", Myanmar's army said on Facebook late Wednesday.

The move comes amid a mounting diplomatic spat between the two countries, with Britain saying Wednesday it had suspended all educational training courses for the Myanmar military over concerns of rights abuses in Rakhine state.

Rohingyas are widely reviled in Buddhist-majority Myanmar, where they are considered illegal 'Bengali' immigrants brought in from modern-day Bangladesh during British colonial rule.

There were an estimated 1.1 million Rohingyas in Rakhine state before the current crisis, though nearly half have fled into Bangladesh where they are cramped into ill-equipped camps.