It was unclear who was responsible for the assault, which came as the President made a speech marking the first day of Eid al-Adha holiday. 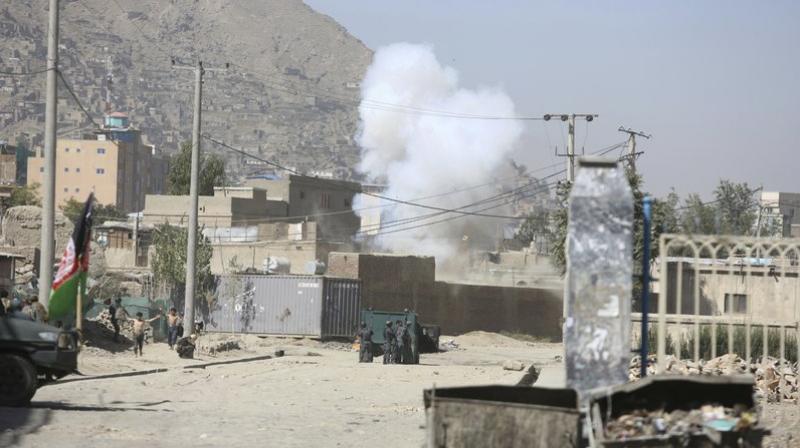 Smoke rises from a house where attackers are hiding in Kabul, Afghanistan, August 21, 2018. (Photo: AP)

Kabul: Afghan security forces battled militants in Kabul’s old quarter Tuesday, with military helicopters firing above a mosque to quell an assault that was launched with a rocket barrage against the capital.

It was not immediately clear who was responsible for the assault, which came as President Ashraf Ghani was making a speech marking the first day of the Islamic Eid al-Adha holiday, days after offering the Taliban a conditional three-month ceasefire.

An Afghan army helicopter swooped in low over the street near the Eidgah Mosque in a central district of the city and fired a rocket on a militant position, sending a plume of dust into the sky.

People who moments earlier had been buying livestock for the Eid feast could be seen sprinting for shelter as cars swerved in the road to flee the fighting. Blasts and gunfire could be heard as security forces cordoned off the area.

The mosque is near the presidential palace where Ghani was making his speech, which was being aired live on Facebook when the attack began.

The president can be seen pausing as multiple blasts are heard in the background, some sounding nearby, before stating: "This nation is not going to bow to these rocket attacks."

The attackers appeared to be in a building behind the mosque, which was partially destroyed in another attack several years earlier and is not believed to have been in use for Eid.

Police said the fighting began around 9:00 am, after multiple rockets struck in at least two areas of Kabul. Footage aired live on broadcaster Tolo News showed dark black smoke emanating from the area near the mosque while fire trucks and security vehicles rushed to the scene.

Kabul police spokesman Hashmat Stanikzai said police believe at least four militants are involved in the assault. "An operation has been launched to arrest or gun them down," he told AFP.

Interior ministry spokesman Najib Danish confirmed that militants had taken over a building near the mosque and fired several rockets.

"Two people have been wounded. Security forces are fighting the terrorists," he told AFP.

Danish later told Tolo that the militants were using rocket propelled grenades and mortars to target parts of the city.

"Choppers are flying over the site and the security forces are busy defusing two explosive-packed vehicles at the site that the terrorist wanted to detonate," wrote interior ministry communications chief Bahar Mehr on Facebook.

A heavy security presence could also be seen near the Kabul Stadium.

Ghani unveiled the government's latest ceasefire gambit during an Independence Day address late Sunday, saying security forces would observe the truce beginning this week -- but only if the militants reciprocated.

The truce offer was welcomed by the United States and NATO after nearly 17 years of war, though it was not clear if their forces in Afghanistan would also participate.

The Taliban did not immediately respond to Ghani's proposal, but have vowed to release "hundreds" of "enemy prisoners" to mark the Eid holiday, which began in Afghanistan on Tuesday.

It was not clear which prisoners they were referring to.

The move followed an extraordinarily violent week in Afghanistan that saw that Taliban storm the provincial capital of Ghazni -- just a two-hour drive from Kabul -- and press the fight against security forces across the country, with estimates suggesting hundreds of people may have been killed.

Analysts were mixed over Ghani's proposal, with some saying the government's move was a sign of desperation after recent heavy bloodshed, while others said the trust-building measure was integral to paving the way for negotiations.

It came after an initial ceasefire in June, the first such truce since the US-led invasion in 2001 that toppled the Taliban regime.

For just three days thousands of insurgents poured into cities across Afghanistan, eating ice cream and posing for selfies with security forces to celebrate.

The brief respite spurred hopes that a new path was opening for possible peace talks in the country to end the nearly 17-year-old war.