Imran Ali said the trial was conducted in 'haste and legal requirements were not fulfilled' during the trial. 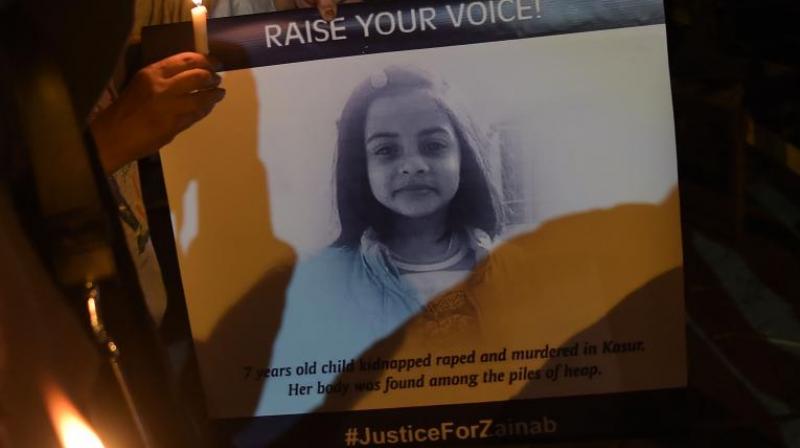 The girl's father Muhammad Amin expressed satisfaction over the verdict, saying: 'We are satisfied on the verdict but we wanted him to be hanged publicly.' (Photo: AFP)

Lahore:  A serial killer in Pakistan, who was sentenced to death for the brutal rape and murder of seven-year-old Zainab Ansari, on Tuesday challenged his conviction in the Lahore High Court alleging that his trial was conducted in "haste" without fulfilling legal requirements.

In the first ever trial in the country's history that concluded in shortest period of four days, an anti-terrorism court on Saturday sentenced to death 23-year-old Imran Ali on four grounds -- murdering a child, kidnapping a child, rape of a minor, and committing an unnatural act with a minor.

In his appeal, he declared that he is "not guilty".

He said the trial was conducted in "haste and legal requirements were not fulfilled" during the trial. He appealed to the high court to overturn the ATC's verdict.

Besides death penalty, Imran was also sentenced to seven years in jail with a fine of Rs 1 million for desecrating the body of a minor.

He was arrested in January, two weeks after he raped and killed the 7-year-old girl and threw her body into a garbage dump in Kasur city, some 50 kilometres from Lahore.

The brutal rape and murder of the child had sparked outrage and protests across the country. Her case was the twelfth such incident to occur within a 10 kilometre radius in Kasur city over a 12-month period.

The arrest brought to light seven more such crimes and many Pakistanis have demanded he be publicly executed.

He is facing further charges in the cases of seven other children he attacked five of whom were murdered.

The prosecution lawyer had earlier claimed that Imran had been given ample chance to defend himself, but he chose to confess his crimes.

A total 56 witnesses were presented against him in addition to forensic evidence, DNA and polygraph tests.

The girl's father Muhammad Amin expressed satisfaction over the verdict, saying: "We are satisfied on the verdict but we wanted him to be hanged publicly."

Some lawyers and activists had shown concerns about the fairness of the trial inside jail. Advocate Asad Jamal said the trial could not be held in a free and fair manner unless the suspect was given an ample opportunity to defend himself through a counsel of his choice.

He said the trial had been conducted in camera without access to independent observers, members of the bar and independent legal counsel for the accused.

He said the prosecution could not propose or nominate a lawyer to defend Imran because there had always been a clear conflict of interest.