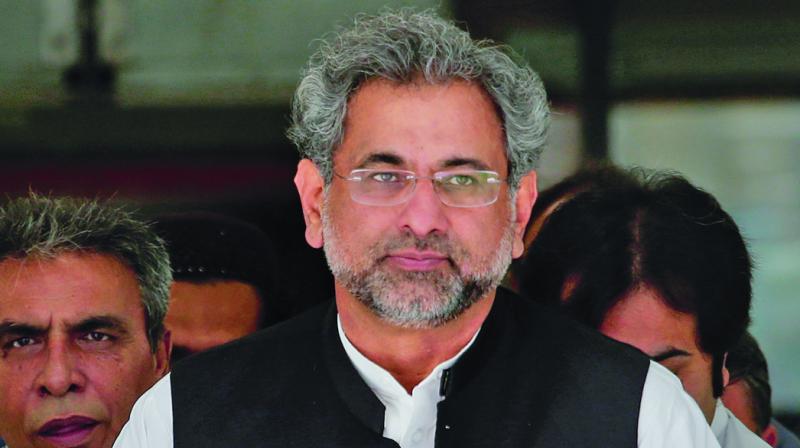 The former prime minister has refused to avail of the service of a lawyer, saying he would fight his case himself. (Photo: AP)

Islamabad: A Pakistani court on Friday sent former premier Shahid Khaqan Abbasi on a 13-day remand to the country's anti-graft body probing a case of alleged corruption of multi-billion-rupees in awarding an import contract of the liquefied natural gas (LNG) from Qatar.

Abbasi, who served as the prime minister from August 2017 to May 2018, was arrested on Thursday by a National Accountability Bureau (NAB) team in Lahore when he was on his way to hold a press conference in Islamabad.

The Pakistan Muslim League (PML-N) leader presented before Accountability Court judge Mohammad Bashir who accepted the NAB's plea for a 13-day remand, and ordered the anti-graft body to present the former premier before him again on August 1. During the hearing, Abbasi asked the judge to grant NAB a 90-day remand.

However, the court said as per the law, 90-day remand could not be granted in one go.

"They are seeking remand, give them remand. I have fully cooperated with the NAB, but I was still arrested. I know why they are asking for remand," Abbasi said.

The former prime minister also refused to avail of the service of a lawyer, saying he would fight his case himself.

He told the media persons, waiting outside the court, that the worth of the case is equal to "zero divided by zero".

The NAB is probing alleged corruption in the award of a contract to import LNG from Qatar by Abbasi when he was minister for petroleum and natural resources in the Cabinet of former premier Nawaz Sharif.

The probe started in 2015 but made little progress. Abbasi, after Nawaz Sharif, is the second former premier who is in jail on alleged corruption charges.

Apart from them, former president Asif Ali Zardari is also in the NAB's custody in fake bank accounts case.