The Ahmadi sect has 10-20 million followers worldwide who face discrimination in a number of Muslim-majority nations. 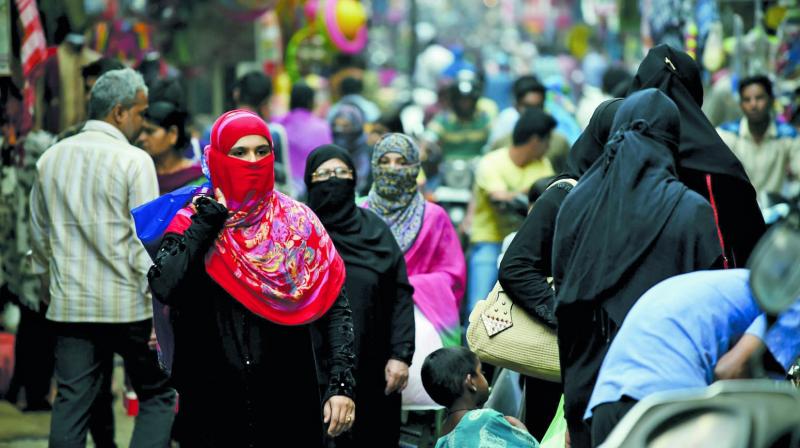 By law they cannot call their place of worship mosques or distribute religious literature, recite the Koran or use traditional Islamic greetings, measures that they say criminalise their daily lives. (Photo: File/representational)

Rabwah: Crammed into buses and mini-vans, more than 10,000 Pakistanis travelled to a mosque on the outskirts of the small Punjabi town of Rabwah, for the sole purpose of denouncing followers of the minority sect based here as “infidels and enemies of the state”.

For members of the long persecuted Ahmadi community, who are forbidden to call themselves Muslims and face discrimination and violence over accusations their faith insults Islam, the open vitriol on display at the Oct. 20 rally was not new.

But this year, they say, anti-Ahmadi rhetoric has also re-entered mainstream Pakistani politics, as politicians seek to shore up support among religiously conservative voters after surprise gains by two new Islamist parties.

“We are an easy community to scapegoat for political opponents to target each other,” said Usman Ahmad, who moved to Pakistan from Britain to work as a community activist.

With a general election due in 2018, politicians from both the religious fringe and established parties have had the Ahmadis in their sights.

In the past six weeks, a row over proposed changes to the election law that would have eased some of the barriers on Ahmadis participating in elections has seen the group denounced on the floor of Pakistan’s parliament, while one of the new Islamist parties has held street protests.

The government has since taken out ads in major newspapers reaffirming a religious oath requiring elected officials to vow that they do not follow anyone claiming to be a prophet after Mohammad and “nor do I belong to the Qadiani group”, using a common derogatory term for Ahmadis.

The Ahmadis consider themselves to be Muslims, but their recognition of Mirza Ghulam Ahmad, who founded the sect in British-ruled India in 1889, as a “subordinate prophet” is viewed by many of the Sunni majority as a breach of the Islamic tenet that the Prophet Mohammad was God’s last direct messenger.

The Ahmadi sect has 10-20 million followers worldwide who face discrimination in a number of Muslim-majority nations such as Indonesia and Algeria, as well as being ostracised by large parts of the Muslim community in Britain.

There are about half a million Ahmadis in Pakistan, local leaders say, though other estimates have put the number at 2-4 million.

Ahmadis are some of the most common defendants in criminal charges of blasphemy, which in Pakistan can carry the death penalty.

By law they cannot call their place of worship mosques or distribute religious literature, recite the Koran or use traditional Islamic greetings, measures that they say criminalise their daily lives.

Community leaders say these moves laid the groundwork for a sectarian divide that has since seen many violent attacks on Ahmadis and birthed multiple militant organisations, including many that are now linked to Islamic State.

In the past four years, the Punjab government has also targeted Ahmadis under the country’s anti-terrorism laws, filing at least eight cases against Ahmadis on charges of producing hate literature, including the sect’s own holy texts.

The offices of an Ahmadi magazine in Rabwah were raided in December 2016 by police, who arrested seven people and confiscated papers and hard drives.

“They stormed the office, it felt like a group of terrorists had come in,” said Amir Fahim, who worked at the magazine and was held for 65 days.

“They said the religious language you use belongs to us and the things you write offend the sensibilities of Muslims.”

Community leaders say the use of anti-terrorism laws marks a new phase in the targeting of Ahmadis.

“Here, to be an Ahmadi, through state laws, is a crime,” Pakistan’s Ahmadi community spokesman Salimuddin said. “There are restrictions on our annual gatherings, our annual games ... If the state did not persecute us, we would not be persecuted.”

“The Punjab Government arrested thousands on charges of hate speech during the last three years,” he said. “Anti-Ahmadi groups were also included in them.”

Many Ahmadis in Pakistan say they only truly feel safe in Rabwah, a town of more than 60,000 in eastern Punjab that is 95 percent Ahmadi. Most of the town’s infrastructure is maintained on contributions made by the community, including free hostels and food for visitors and a community organised garbage clean-up.

But on the edge of Rabwah lies a small settlement and a mosque run by a right-wing Islamist organisation that openly professes hatred for Ahmadis.

The organisation, Khatm-e-Nubuwwat (Finality of the Prophet), built the mosque on land the Punjab government ordered confiscated from Ahmadis in 1975 for low-income housing.

Khatm-e-Nubuwwat has been at the forefront of initiating blasphemy allegations against Ahmadis. Every year for 36 years, the group has held an anti-Ahmadi rally at the mosque.

“Qadianis are the enemies of the prophet,” said Aziz ur Rehman, an organiser of the Rabwah conference, adding: “A country that was made in the name of the prophet cannot accept Qadianis.”

Always volatile, political atmosphere in Pakistan has been especially tense since the Supreme Court removed former Prime Minister Nawaz Sharif from office in July over corruption allegations, which he denies.

The calculations of the mainstream parties have been complicated by the formation of two new Islamist political groups that garnered more than 10 percent in two recent by-elections and could become spoilers in a close election.

One of the new parties, Tehreek-e-Labaik, launched a political furore in October after lawmakers from Sharif’s party, which still holds a parliamentary majority, approved apparently small changes to the country’s election law.

The changes eliminated a requirement for Ahmadi voters to declare they are not Muslim and turned a religious oath for elected officials declaring belief in the Finality of the Prophet and affirming they are not Ahmadi into a simple declaration of belief.

Tehreek-e-Labaik quickly termed any concessions to Ahmadis to be blasphemy and threatened mass protests.

The government, still controlled by Sharif’s party, quickly retreated and reversed the changes.

A week later, speaking before Pakistan’s National Assembly, Sharif’s son-in-law, lawmaker Muhammad Safdar Awan called for Ahmadis to be barred from employment in the government, judiciary, and military. Sharif himself later distanced himself from Safdar’s statement.

The climbdown did not appease Tehreek-e-Labaik, which last week launched street protests blockading roads into Islamabad and demanding the law minister be sacked. The protests are ongoing and have paralysed traffic in the capital.

Saadia Toor, author of State of Islam said it’s likely that anti-Ahmadi rhetoric will continue up to next year’s elections, due by the end of August.

“Anti-Ahmedi sentiment is widely held across the Pakistani Muslim mainstream, even among moderate Sunnis,” she said. “So using them as scapegoats for political purposes is easy.”