During the 13-minute special session, Dhammika Dassanayake, Secretary General of Parliament, announced the vacancy for the post of president 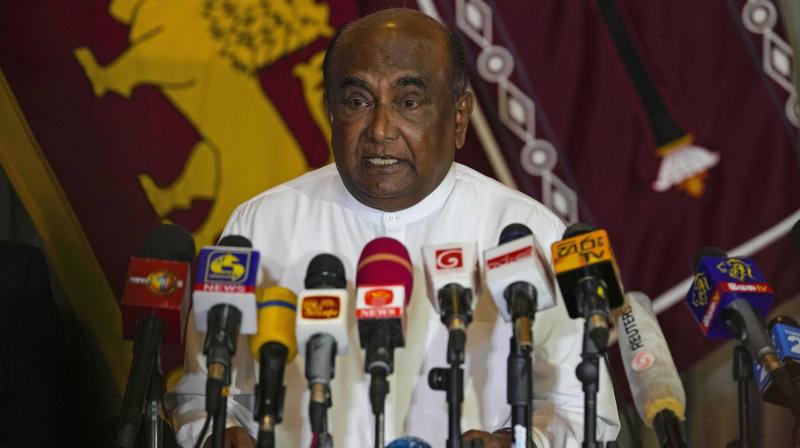 Colombo: Sri Lanka's Parliament met in a brief special session on Saturday to announce the vacancy in the presidency following the resignation of Gotabaya Rajapaksa, who has fled the country after a popular uprising against him for mishandling the country's economic crisis.

Rajapaksa, who fled to the Maldives on Wednesday and then landed in Singapore on Thursday, formally resigned on Friday, capping off a chaotic 72 hours in the crisis-hit nation that saw protesters storm many iconic buildings, including the President and the Prime Minister's residences here.

During the 13-minute special session, Dhammika Dassanayake, Secretary General of Parliament, announced the vacancy for the post of president.

Former president Rajapaksa's resignation letter was read during the session.

According to section 4 of the presidential elections (special provisions) Act No 2 of 1981 the parliament should be convened within three days after the vacancy occurs," Janakantha de Silva, Parliament's director of communications, said earlier.

Meanwhile, the main Opposition leader Sajith Premadasa has officially declared his intention to contest the vote to be held on July 20.

I am contesting to be the president."

"Even though it is an uphill struggle, I am convinced that truth will prevail," he said in a statement.

The ruling SLPP which officially announced its backing of Ranil Wickremesinghe, the acting president, found some resistance to its decision from within.

Its chair GL Peiris said the party should not vote for anyone other than its own member.

He said the party must back Dullas Alahapperuma, a breakaway SLPP candidate who has already put himself forward to the vote.

The party is to meet on Saturday to make the final decision.

For the first time since 1978, Sri Lanka will elect the crisis-hit country's next president through a secret vote by the MPs and not through a popular mandate, following the resignation of Rajapaksa who was ousted by a popular uprising against him.

Never in the history of the presidency since 1978, Parliament had voted to elect a president.

The only previous occasion when the presidency became vacant mid-term was in 1993 when president Ranasinghe Premadasa was assassinated. DB Wijetunga was unanimously endorsed by Parliament to run the balance of Premadasa's term.

The new president will serve the remaining tenure of Gotabaya Rajapaksa till November 2024.

The front runner in next week's race would be Wickremesinghe. The 73-year-old became prime minister from nowhere in May when he assumed the job to handle the unprecedented economic crisis.

His United National Party (UNP) was routed in the 2020 parliamentary election. Wickremesinghe for the first time failed to win a seat since 1977.

He made it to Parliament in late 2021 through the party's only seat allocated on the basis of a cumulative national vote.

Unpopular he may be and hated for his pro-Western policies and ways, he still enjoys acceptance as a thinker and strategist whose vision is futuristic.

With the island nation facing its worst economic crisis since independence, he has wider acceptance as the one with the capacity to steer the island through turbulence.

A man who always wanted to become president, Wickremesinghe had lost two presidential elections in 1999 and 2005.

Without parliamentary numbers of his own, Wickremesinghe would be entirely dependent on the ruling Sri Lanka Podujana Peramuna (SLPP) member vote. Not a foregone conclusion of their support as the SLPP stays ideologically opposed to him.

Premadasa, 55, for long the understudy of Wickremesinghe was the one who turned the tables on his former leader. His newly formed SJB ousted the grand old party of Wickremesinghe from all its bastions to emerge as the main opposition in 2020.

Ironically it was his failure to step in to fill the power vacuum in mid-May which made way for Wickremesinghe to become Prime Minister from nowhere.

He only stands an outside chance as most ruling SLPP members are unlikely to back him. Unlike Wickremesinghe though he starts the race with 50 votes minimum.

Alahapperuma, 63, is from the breakaway group of the ruling SLPP.

The ex-Cabinet Minister of Information and Mass Media and former newspaper columnist is being seen as a left-leaning political ideologue. Held ministerial positions since 2005 and enjoys the reputation of having a clean public life. His task too would be uphill given his position as a breakaway member.

Field Marshal Sarath Fonseka, 71, the Army commander who won the military conflict with the LTTE which fought the Army in its bid to set up a separate Tamil homeland in the north and east regions, could be a potential candidate.

He comes out as the only politician who was not opposed by the wider group of protesters who engineered Rajapaksa's downfall. He would however only come into the race if his leader Premadasa opted out of the contest.