Sri Lankan leader reportedly took part in the discussions in the roundtable meeting on Monday. 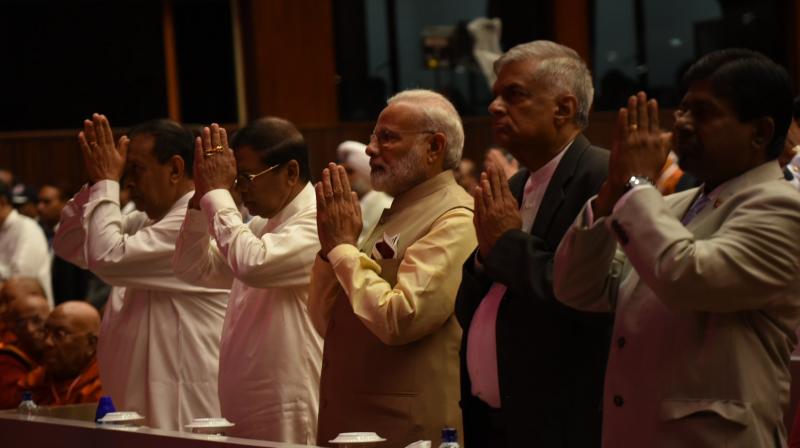 Beijing: Sri Lanka, which attended the just concluded Belt and Road Forum here, has backed India's concern over the Kashmir issue, saying it is difficult for New Delhi to accept the USD 50 billion China-Pakistan Economic Corridor (CPEC) as it goes through the "heart of Indian interests".

India, which skipped the high-profile meeting, would have joined "very happily" in the One Belt and One Road (OBOR) initiative of China, said Sarath Amanugama, Sri Lanka’s Minister on Special Assignment.

"Unfortunately, the issue is going through the heart of Indian interests. If it is some uncontested region, India would have negotiated its way out. Here especially the Kashmir issue getting dragged into it, makes it difficult for India to be flexible, Amanugama, who accompanied Lankan Prime Minister Wickramasinghe to the two-day forum said.

He said India, China and Sri Lanka were very much part of the ancient Silk Road route as the Chinese Buddhist scholars like Faxian visited both India and Sri Lanka leading to big discoveries of Buddhist relics in the island nation.

"(Chinese) President Xi Jinping has emphasised connectivity. These countries were connected many centuries ago. This will link up these countries on certain rational basis. Once the regional problems are resolved, then India has to play big role in the initiative," he said, adding that India anyway has to play big role "because you cannot think of a belt and road without going over and close to India."

India skipped the meeting due to its sovereignty concerns over the USD 50 billion CPEC, which goes through Pakistan-occupied Kashmir. The two-day conference in Beijing brought together leaders from 29 countries.

Wickaramasinghe, who arrived here a day after he hosted Prime Minister Narendra Modi in Sri Lanka, had a low-key presence at the high-profile summit.

While Sharif and many other leaders spoke at the inaugural ceremony, the Sri Lankan leader reportedly took part in the discussions in the roundtable meeting on Monday.

Amunagama said that Sri Lanka will not permit any foreign military operations in its port by any country including China, in an effort to reassure India's security concerns over Chinese military activity.

Confirming reports that recent Chinese requests for docking of its submarines was declined, he said, "We denied the permission."

"Lanka's position is that our harbours and ports are for commercial operations. All other countries have no strategic interests. We are equidistant from everyone," he said.

Earlier, the problem came because a Chinese submarine was allowed to be docked in Colombo harbour by former president Mahinda Rajapaksa in 2014 which sparked protests from India.

"China, India, US and all other countries, they cannot come into our territorial waters without the consent of the Sri Lankan government," Amanugama said.

Even the Hambantota harbour which Sri Lanka plans to hand over to China under debt equity scheme will function under Sri Lankan Port Authority (SLPA).

He said in the agreement currently being finalised to give 80 per cent stake for Chinese shipping company, it will be allowed to operate inside the harbour but all the outside operations will be carried out SLPA.

The harbour master who permits the ship movement in the harbour will be an SAPA employee, he said. Allaying India's concerns, he said Sri Lanka is taking assistance from the Indian Navy to maintain maritime security including tracking submarines.

India is also providing patrol boats, he said. About Hambantota port, he said, it is entirely a commercial operation. "It was constructed with Chinese assistance costing about USD 1.4 billion. It was established during the regime of Mahinda Rajapaksa," he said.

"But we had an extended debt. Sri Lanka is facing a problem of debt repayment," he said, defending Sri Lanka opting for debt swap for harbour.

Sri Lanka has an estimated debt of USD eight billion to China. The loans were taken for different mega projects.

"So last year we raised it with Premier Li Keqiang. At first we asked for a debt relief, either to write it off or to reschedule payment. But the Premier said it is not possible because they have lent money to several other countries. We cannot write it off to create precedent," he said.

"But suggested why don’t you convert into equity by forming a joint venture company. It will be registered in Sri Lanka and will be Sri Lankan company. Chinese side will convert that into equity. Sri Lanka doesn’t have to repay," he said, adding that it was a "win win situation”.