The names of those Rohingya Muslims found missing during the house-to-house official count are crossed through with a red pen. 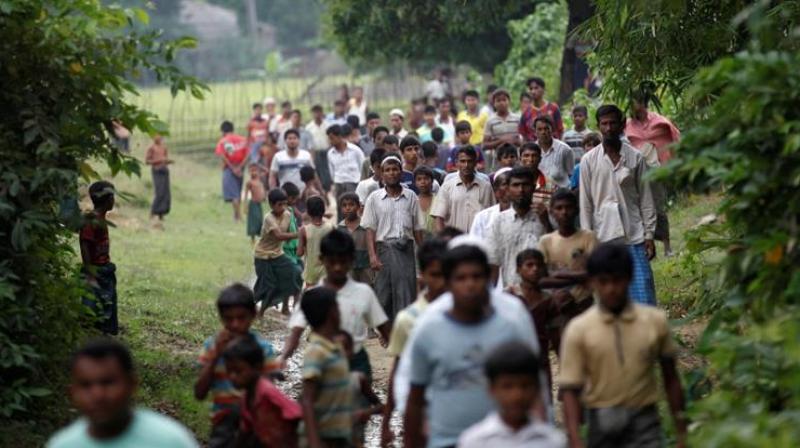 Rohingya civilians have been displaced by a crackdown following the October 9 attacks. (Photo: AP)

Sittwe: Since security forces swept into their villages in northwestern Myanmar late last year, around 75,000 Rohingya Muslims have fled across the nearby border to Bangladesh. Many now fear that the authorities in Myanmar could make their displacement permanent.

At least once a year, local administrators go house-to-house in the Rohingya villages of northern Rakhine State, lining up families to check their names against official lists.

The names of those Muslims found missing are crossed through with a red pen, residents say.

The government says it is not using the household count to try to force the Rohingya out of the country and is holding off from finalising the latest list. But officials confirmed that people eventually struck from the list face legal action under immigration laws if they try to return.

Muhammad Ismail, 30, escaped the recent violence and is now living in a makeshift settlement in Bangladesh. His father told him by phone that officials had visited his home village of Dar Gyi Zarin January, checking who was still there.

"I'm scared that if I go back, I'll be jailed," he told Reuters. "This is the law. This is how we understand the rules."

The household survey, which is not conducted elsewhere in Myanmar, is one of a series of measures that rights activists say amount to a system of apartheid against the 1.1 million Rohingya living in northern Rakhine.

"We have to stand for a group photo as a family," said a Rohingya community leader, who did not want to be named. "They ask us if all the family is there and if anyone is missing."

The authorities have also surveyed and marked for demolition allegedly unauthorized buildings in Muslim villages, residents and officials say. And Rohingyas say their movements are being restricted if they do not accept new temporary identity cards.

The democratically elected civilian government of Aung San Suu Kyi says the identity card scheme will give the stateless Muslim minority more rights, but many Rohingya say they fear it is a ruse to deny them citizenship.

Suu Kyi, a Nobel Peace Prize winner, has been criticised abroad for failing to confront her country's persecution of the Rohingya, who many in the Buddhist majority view as unwanted illegal immigrants from Bangladesh.

Myanmar's armed forces launched a crackdown in northern Rakhine after Rohingya insurgents attacked border guard posts on October 9. Tens of thousands of people fled across the border during the subsequent violence, amid multiple allegations of mass killings and gang rapes by troops.

Accounts gathered from 10 residents and refugees, and confirmed by two Myanmar government officials, show an administrative push to record those who had left began soon after the military campaign started.

The household survey is usually carried out in January and February.

A senior immigration official in northern Rakhine, who declined to be identified, said the count was complete this year aside from those villages worst hit by the conflict.

But he said officials had only marked those missing in pencil - not the feared red pen - and were awaiting orders to finalise the survey.

"This year, because it might create conflict, we've delayed the list," said Kyaw Swar Tun, General Administration Department (GAD) director based in the state capital, Sittwe. "We're waiting for them to come back."

The GAD oversees Myanmar's sprawling local bureaucracy and is controlled by the military.

He declined to show the list to Reuters, citing confidentiality for official documents, or to say when it would be finalised. But, he added, "Once they're on the list, they can't come back."

On Monday the United Nation's special rapporteur on human rights in Myanmar, Yanghee Lee, warned pressing ahead with the exercise while so many people were displaced could be seen as an attempt to depopulate Rohingya districts.

"Conducting a household survey - where those absent may be struck off the list that could be the only legal proof of their status in Myanmar - indicates the government may be trying to expel the Rohingya population from the country altogether," she told the U.N. Human Rights Council in Geneva. "I sincerely hope that is not the case."

Police Major Kyaw Mya Win at Maungdaw police station, in northern Rakhine, said authorities in the area have in the past filed charges against those who had been marked off the list.

"People who fled to Bangladesh have been charged with illegal immigration acts when they returned to the country," he said, declining to outline the specific charges.

Administration along Myanmar's rugged frontier with Bangladesh is largely in the hands of the paramilitary Border Guard Police (BGP).

Residents say that, soon after the conflict erupted, the BGP also began identifying structures in Rohingya villages that had been built without formal permits - including homes, mosques and Arabic schools.

The GAD's Kyaw Swar Tun said more than 3,300 buildings had been listed for demolition, but said none had so far been pulled down.

Min Aung, a minister and spokesman for the Rakhine state government, said officials had ordered a halt to the checks, recognising that they could cause tensions.

However, since the buildings were illegal they would have to be demolished eventually, said Min Aung, a member of Suu Kyi's National League for Democracy, insisting that the same action would be taken anywhere in the country.

"The government just removed illegal buildings like stores, houses, religious building, but they are merely huts, not really big buildings," he said.

Although many Rohingya trace their roots in Myanmar back generations, years of discriminatory policies have left most without valid identification. Temporary cards issued in the 1990s, which gave them voting rights, were invalidated in 2015.

Muslims in northern Rakhine say they are under pressure to accept a National Verification Card (NVC). "If we don't take it we can't travel from place to place," said the community leader.

Suu Kyi's civilian government - which is not in charge of security and does not oversee the BGP, but has been pushing the ID card scheme - says that holders will be able to apply for citizenship.

But Kyaw Hla Aung, a Rohingya lawyer in Sittwe, said the scheme fell short of the group's demand to officially identify themselves as Rohingya - a term Myanmar does not recognise.

"NVC is not related to us - it's for foreigners," he said.

Officials denied the government was coercing people to accept the document.

"The roadblocks are not stopping people from moving – but they are checking NVCs," said state minister Min Aung. "We can't allow people to travel without documents."