China is pivoting towards the Middle East, and Saudi Arabia is strengthening its alliances in east Asia. 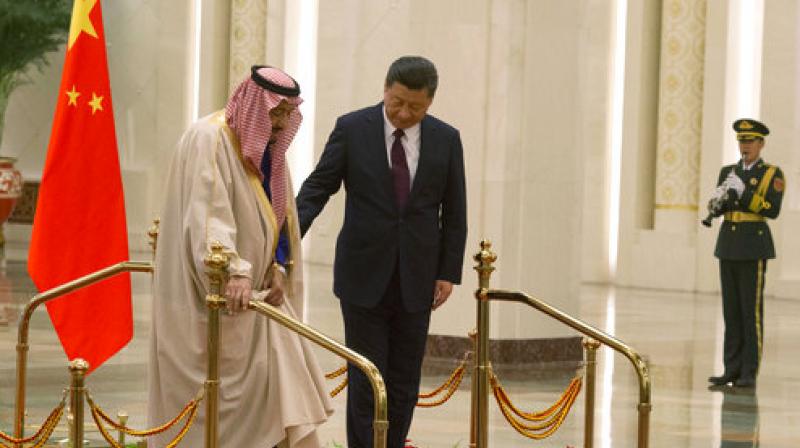 Beijing: President Xi Jinping welcomed visiting Saudi King Salman to Beijing on Thursday as China pursues a charm offensive towards the Middle East, where it has previously kept a low profile.

The king's three-day stay returns the favour after Xi last year visited Saudi Arabia as part of the first state visit to the Middle East by a Chinese leader in seven years.

The 81-year-old monarch arrived on Wednesday with a massive reported entourage of 1,000 people following stops in Japan, Malaysia and Indonesia as part of a month-long Asia tour.

China is pivoting towards the Middle East, and Saudi Arabia is strengthening its alliances in east Asia, as the United States' global diplomatic stance under President Donald Trump remains unclear.

China depends on the volatile Middle East for oil supplies but has long taken a back seat in its disputes.

But over the past year Xi has taken a new approach, with steps that include hosting talks between the opposing parties in the Syrian conflict.

China also is pushing Xi's signature "One Belt, One Road" policy, a strategy to increase trade links and market connectivity between China, Europe and regions in between, based loosely on the ancient "Silk Road" trading route.

"This visit will push forward and continue to improve the quality of our relations and bear new fruit," Xi told the king, who entered their meeting walking gingerly with a cane.

China has been Saudi Arabia's largest trading partner since 2015 and the kingdom was for years the biggest source of crude oil for the fuel-hungry Chinese economy.

The visit is the monarch's first to China since taking the throne in 2015 upon the death of his half-brother King Abdullah.

"China will undoubtedly play an important role in the Middle East and bring its unique strengths to the region," said Li Guofu, a Middle East expert at the China Institute of International Studies.

Ties between Riyadh and Washington were strained during the Obama administration. Although they are expected to improve under Trump, the Saudis are keen to solidify east Asian ties.

"Past (China-Saudi) ties were good, but at least from a Saudi perspective, can use a significant boost," said Joseph Kechichian, a senior fellow at Riyadh's King Faisal Center for Research and Islamic Studies.

"In terms of strategic location, Saudi Arabia serves as the central hub connecting three continents -- Asia, Africa and Europe -- and has been an important part of the initiative," Al-Mady said.