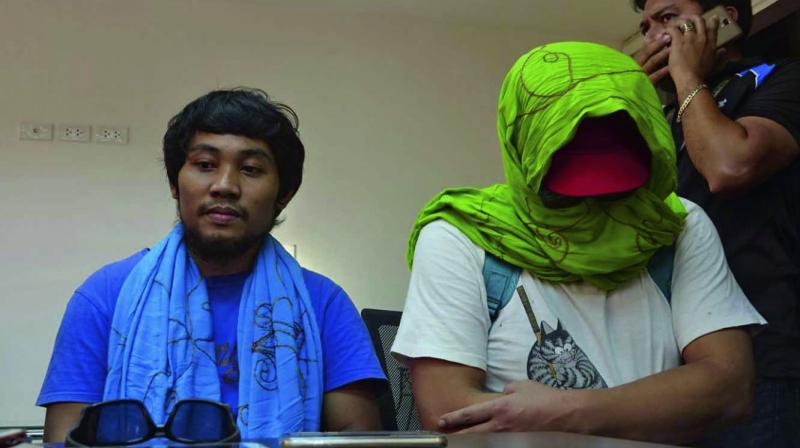 South Korean hostage Park Chul-hong and Filipino hostage Glen Alindajao after reaching Davao following their release after three months of captivity on Saturday from kidnappers in the volatile island of Jolo in Philippines. (Photo: AP)

Manila: Philippines President Rodrigo Duterte said he had ordered his troops to bomb extremists fleeing with captives in a bid to stop a wave of kidnappings at sea, calling the loss of civilian lives in such attacks “collateral damage”.

Earlier, Mr Duterte had said that he had told his Indonesian and Malaysian counterparts that their forces could blast away as they pursued militants who abducted sailors in waters where the three countries converged. He said in a speech late on Saturday that he had given the same orders to the Filipino forces.

He said that he instructed the Navy and the coast guard that “if there are kidnappers and they’re trying to escape, bomb them all”. “They say ‘hostages.’ Sorry, collateral damage,” he said in a speech to business people in Davao, his southern hometown. He said such an approach would enable the government to get even with the ransom-seeking militants. “You can’t gain mileage for your wrongdoing, I will really have you blasted,” he said. His advice to potential victims was, “So, really, don’t allow yourselves to be kidnapped.”

Mr Duterte’s remarks reflect the alarm and desperation of the Philippines, along with Malaysia and Indonesia, in halting a series of ransom kidnappings primarily by Abu Sayyaf militants and their allies along a busy waterway for regional trade. On Saturday, ransom-seeking Abu Sayyaf gunmen freed a South Korean captain and his Filipino crewman who were abducted three months ago from their cargo ship.

The gunmen handed skipper Park Chul-hong and Glenn Alindajao over to Moro National Liberation Front rebels, who turned them over to Philippines officials in the southern Jolo town in the predominantly Muslim Sulu province. The Moro rebels, who signed a 1996 peace deal with the government, have helped negotiate the release of several hostages of the smaller but more violent Abu Sayyaf, which is blacklisted by the US as a terrorist organisation for kidnappings, beheadings and bombings.

Mr Duterte’s adviser dealing with insurgents, Jesus Dureza, said he was not aware of any ransom being paid in exchange for the freedom of the sailors. At least 27 hostages, many of them foreign crewmen, remained in the hands of different Abu Sayyaf factions, he said. There have been persistent speculations, however, that most of the freed hostages have been ransomed off. A confidential Philippines government threat assessment report said the militants pocketed at least $7.3 million from ransom kidnappings in the first six months of 2016.