Fearing repatriation, refugees who fled to Bangladesh with testimony of murder, rape and arson after a military crackdown went into hiding. 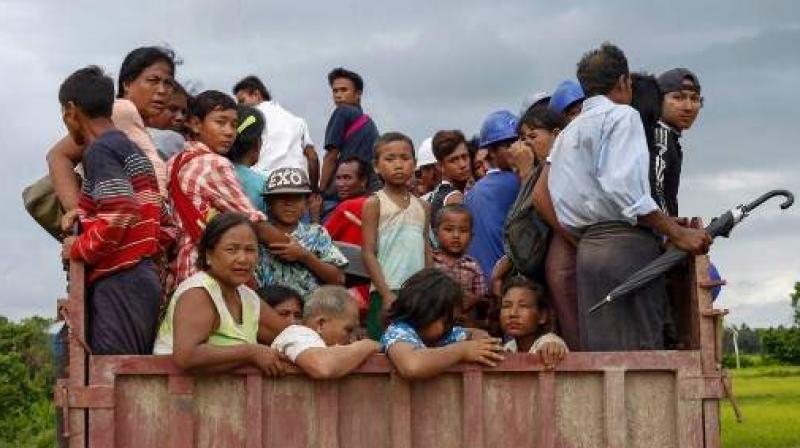 Dhaka: Doubts over plans to begin repatriating the hundreds of thousands of Rohingya who fled Myanmar last year escalated on Thursday as Bangladesh's refugee commissioner said none wanted to return and that they would not be forced to go.

Terrified refugees, who arrived in Bangladesh with testimony of murder, rape and arson after they escaped a military crackdown last year, went into hiding as authorities insisted they would proceed despite UN warnings.

But Bangladesh's refugee commissioner cast doubt on whether the plan to send the first batch of 150, from a preliminary 2,260 slated for return, could go ahead as scheduled on Thursday.

"According to the UNHCR voluntariness assessment, none of the 50 families interviewed expressed their willingness to go back under the present circumstances. None feels safe to go back now," Mohammad Abul Kalam told AFP.

Kalam would not say if the planned repatriations for Thursday were cancelled.

But he said: "We cannot force them to go back against their will."

Rohingya refugees currently reside in vast camps in southeastern Bangladesh, including a massive settlement in the border district of Cox's Bazar, where community leaders said most of those marked for repatriation had headed to the hills.

"Ninety-eight percent of the families (on the list) have fled," community leader Nur Islam said on Thursday.

He and other community leaders said that an increase in the number of Bangladeshi soldiers at the camps in recent days had stoked anxiety.

"Everyone is tense, the situation is very bad," Abdur Rahim, another leader, told AFP in Cox's Bazar. "There are a lot of army and police inside the camps. They are checking the ID cards of Rohingya."

A local police chief, Abul Khaer, played down reports of additional security, saying nothing in terms of personnel had changed in recent months.

The UN refugee agency has publicly cautioned against the repatriation going ahead and, in an internal briefing paper seen by AFP, laid out stringent conditions under which it would offer humanitarian assistance to anyone who ends up returning.

In the confidential document dated November 2018, UNHCR said it would only provide aid if returnees were allowed back to the villages they had left or to other locations chosen by them.

Bangladesh authorities have insisted only those who volunteer will be returned but UN High Commissioner for Human Rights Michelle Bachelet said on Tuesday that many refugees are panicking at the prospect of being sent back against their will.

"With an almost complete lack of accountability –- indeed with ongoing violations -– returning Rohingya refugees to Myanmar at this point effectively means throwing them back into the cycle of human rights violations that this community has been suffering for decades," Bachelet said.

She said that the violations against the Rohingya "amount to the worst atrocities, including crimes against humanity and possibly even genocide".

Amnesty International on Wednesday called on Bangladesh and Myanmar authorities to "immediately halt" their plans, saying it was a "reckless move which puts lives at risk".

"These women, men and children would be sent back into the Myanmar military's grasp with no protection guarantees, to live alongside those who torched their homes and whose bullets they fled," said Amnesty's Nicholas Bequelin.

"The Bangladesh government will be stunned to see how quickly international opinion turns against it if it starts sending unwilling Rohingya refugees back into harm's way in Myanmar," said Bill Frelick, HRW refugee rights director.

US Vice President Mike Pence told Aung San Suu Kyi on Wednesday that the violence against the Rohingya was "without excuse", adding pressure to Myanmar's civilian leader.