Sirisena, who will lead a delegation to the 73rd United Nations General Assembly in New York, will address general debate on September 25. 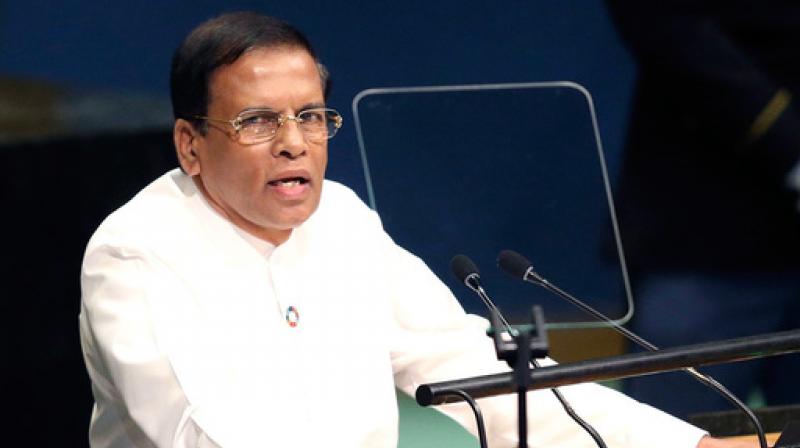 Addressing the media persons here Friday, Sirisena said he would use his address at the UN general assembly later this month to make a case for removal of war crimes charges. (Photo: File)

Colombo: Sri Lanka will seek "concessions" from the UN, including a special request to the drop war crime charges against its troops during the civil war with the LTTE, President Maithripala Sirisena said Friday.

Sirisena, who will lead a delegation to the 73rd United Nations General Assembly (UNGA) in New York, will address the general debate on September 25.

According to the government figures, around 20,000 people are missing due to various conflicts including the civil war with Lankan Tamils in the north and east which claimed at least 100,000 lives.

Relatives of the missing Tamil people allege that the Lankan state - particularly its army, navy and police - were behind most of the disappearances.

The Liberation Tigers of Tamil Ealam (LTTE), which led the separatist war for a separate Tamil homeland, was finally crushed by the Lankan military in 2009 with the death its supremo Velupillai Prabhakaran.

Addressing the media persons here Friday, Sirisena said he would use his address at the UN general assembly later this month to make a case for removal of war crimes charges.

"I will make a special request at the UN," he said, adding that "I will also make a written request to the (UN) human rights council to settle this issue of war crimes. I want to tell them to remove these charges and give us some concessions to resolve this issue.”

The UNHRC resolutions demanded Colombo to set up a credible international investigation.

It also condemned the government troops and the LTTE for alleged war crimes.

The resolutions were adopted during the regime of his predecessor Mahinda Rajapaksa.

Following the defeat of Rajapaksha in 2015 general elections, Sri Lanka was given an extension to implement the mechanisms prescribed by the UNHRC.

The government had set up the Office of Missing Persons (OMPs) and also introduced a bill of reparations for the victims of the three-decade-old armed conflict.

He said that his government was able to avoid Sri Lanka's isolation in the UNHRC, which had prevailed before it came to power and succeeded in fostering friendship.