The monsoon havoc which started on Friday has affected 27 districts spanning from the eastern, central to the western regions. 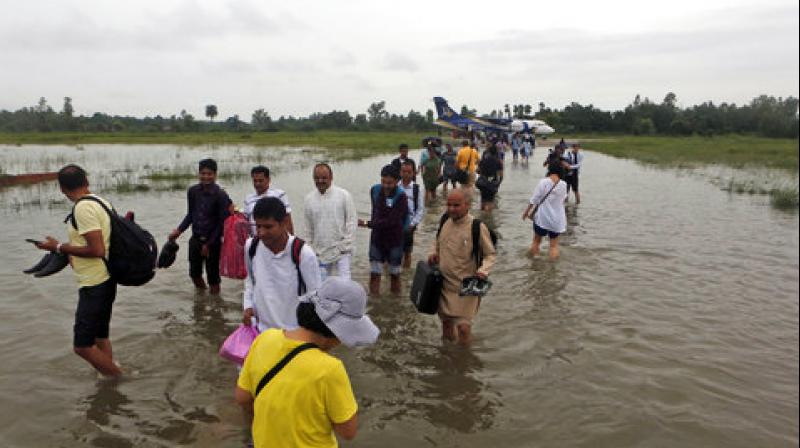 Heavy rainfall has lashed Nepal for the past four days, swelling several Himalayan rivers beyond the danger mark and causing flooding and landslides at many places in the country. (Photo: AP)

Kathmandu: At least 12 people were killed in a landslide in Nepal on Monday, taking the death toll in floods and rain-related calamities to 78, while thousands remained displaced across the Himalayan nation, officials said.

Heavy rainfall has lashed Nepal for the past four days, swelling several Himalayan rivers beyond the danger mark and causing flooding and landslides at many places in the country.

The river Rapti, which flows through a large part of Nepal towards the southern plains, has flooded human settlements and hotels popular with tourists in the Chitwan Valley.

According to the Ministry of Home Affairs (MoHA), in the latest incident at least 12 people were killed by landslide in Morang district today, taking the death toll in the district to 17 and overall to 78 and 35 went missing in the last four days.

The monsoon havoc which started on Friday has affected 27 districts spanning from the eastern, central to the western regions.

The latest data released by the MoHA showed that one person was killed in Panchthar and Ilam each, five in Jhapa and Morang each and eight in Sunsari.

Meanwhile, Nepal's Energy Minister Mahendra Bahadur Sahi has claimed that the highways built along the no man's land on the Indian side of the border are the major reasons behind the floods in the Terai.

"The highways made by elevating the land next to the Nepal-India border have restricted the natural flow of water, leaving Nepal's Terai plains submerged during the rainy season," Shahi said.

The government will take up the issue with India during Prime Minister Sher Bahadur Deuba's India visit slated for next week, Shahi said yesterday.

A total of 34,843 houses were inundated across the plains. More than 1,000 houses were destroyed in floods that killed an estimated 400 livestock, the Kathmandu Post reported.

The government has mobilised Nepal Police, Nepali Army and Armed Police Force personnel for rescue and recovery work while rainfall is likely to continue in the next few days, as predicted by the Meteorological Forecasting Division (MFD).

Weathermen have said the extreme rainfall, starting from eastern Nepal, witnessed in the last few days was caused by the formation of a low pressure zone over the hills. The monsoon, it added, was gradually getting weaker in the east and moving towards the west.