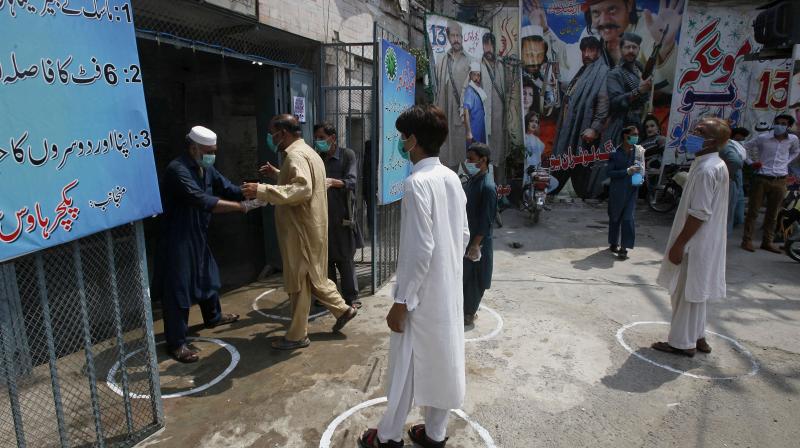 People wear face masks and keep social distancing as they enter a cinema following an ease in restrictions that had been imposed to help control the coronavirus, in Peshawar, Pakistan. (AP)

Washington: The United States has urged its citizens not to travel to Pakistan due to the COVID-19 pandemic and terror threat.

The Centers for Disease Control and Prevention (CDC) has issued a Level 3 Travel Health Notice for Pakistan due to COVID-19, the State Department said in its latest travel advisory on Wednesday.

"Travellers to Pakistan may experience border closures, airport closures, travel prohibitions, stay at home orders, business closures, and other emergency conditions within Pakistan due to COVID-19," it said.

It also urged US citizens not to travel to Balochistan and Khyber Pakhtunkhwa provinces, including the former Federally Administered Tribal Areas, due to terrorism and kidnapping and also in the immediate vicinity of the Line of Control due to terrorism and the potential for armed conflict.

Noting that terrorist groups continue plotting attacks in Pakistan, the advisory said that a local history of terrorism and ongoing ideological aspirations of violence by extremist elements have led to indiscriminate attacks on civilian as well as local military and police targets.

Terrorists may attack with little or no warning, targeting transportation hubs, markets, shopping malls, military installations, airports, universities, tourist locations, schools, hospitals, places of worship, and government facilities, it said, noting that terrorists have targeted US diplomats and diplomatic facilities in the past.

There are greater security resources and infrastructure in the major cities, particularly Islamabad, and security forces in these areas may be more readily able to respond to an emergency compared to other areas of the country. While threats still exist, terrorist attacks are rare in Islamabad, it said.