Torrential downpours have destroyed homes and infrastructure in more than a dozen districts since Friday morning. 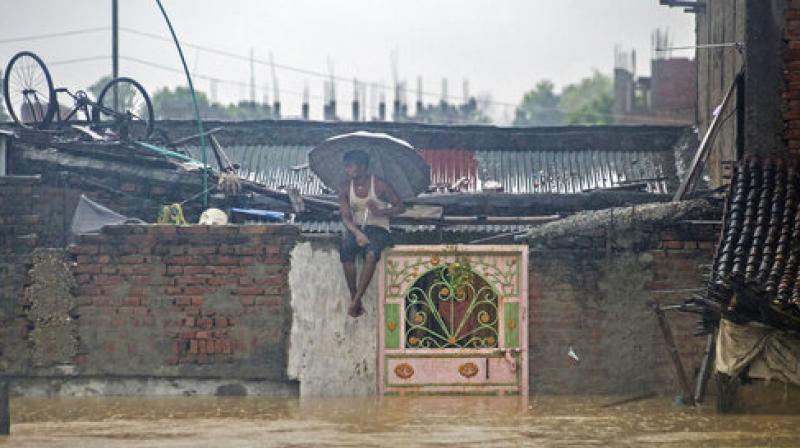 Kathmandu: The death toll from floods and landslides in Nepal has jumped to at least 40, officials said on Sunday, with thousands forced to flee their homes amid days of heavy monsoon rain.

Torrential downpours have destroyed homes and infrastructure in more than a dozen districts since Friday morning, and forced families to climb into trees to escape the rapidly rising waters.

"Since Friday, at least 40 people have been killed in the floods and landslides," home ministry spokesman Deepak Kafle said, upgrading the previous toll of 25. "Our search and rescue teams are working continuously in affected areas. We are also providing relief to the victims."

The Red Cross said in a statement the death toll had reached at least 53, with dozens more missing and injured.

Families perched on trees with young children overnight as flood waters swept away homes in a village in southern district of Chitwan, local media reported.

In the popular jungle safari resort of Sauraha in Chitwan, hotels were forced to shift their guests to higher floors as waters rushed into the premises.

A hotel owner said they used elephants to transport tourists to the nearest open highway and airport to help them return to the capital Kathmandu.

"There isn't a house without water. Hundreds of families are taking shelter in local schools," said Raghu Ram Mehta, a resident of Sunsari district, which has suffered nine deaths, the highest of any district.

Biratnagar airport in eastern Morang district was closed after being submerged in a metre of water, said authorities at the international terminal.

"I have already instructed authorities concerned to rescue flood victims, move them to safer locations and immediately provide relief to them. All four security agencies have already swung into action," he said in a video recording Saturday.

The latest casualties bring the death toll from this year's monsoon season to more than 100, government records show.

Nearly 100 people died last year in Nepal during the rainy season, which typically begins in late June and lasts until the end of August.

Last weekend in the central lowlands, four girls from the same family drowned when they fell into a flooded roadside ditch.

Nepal's weather department issued an alert Saturday warning that heavy rains were expected to continue for another day, and advised districts to close schools and residents to stay indoors.