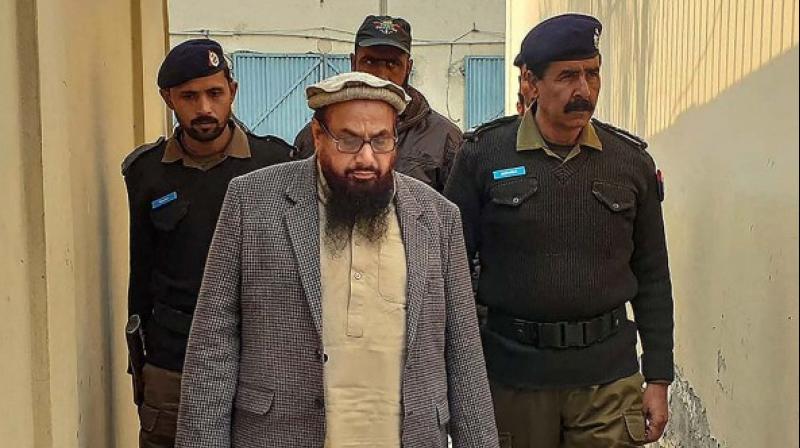 JuD chief Hafiz Saeed being produced at a court in Lahore. (PTI)

Islamabad: Pakistan has restored the bank accounts of the outlawed Jamaat-ud-Dawa (JuD) chief and the 2008 Mumbai terror attack mastermind Hafiz Saeed and his four top aides, a media report said on Sunday.

Abdul Salam Bhuttavi, Haji M Ashraf, Yahya Mujahid and Zafar Iqbal - all on the UN Security Council's terrorists list  were the other members of the JuD and Lashkar-e-Taiba who got their bank accounts restored, The News reported.

They are currently facing sentences ranging 1 to 5 years in Lahore jail for terror financing cases filed against them by the Punjab Counter Terrorism Department (CTD), the paper said.

"The restoration of bank accounts has taken place following formal approval of the Sanctions Committee of the United Nations Security Council, the paper said.

Citing sources, the paper said that the JuD leaders had appealed United Nations for restoring their bank accounts that they could run their family affairs.

"Initially we did not want to file an appeal but we were advised to file it as it was difficult for our leaders to run their affairs," a senior JuD leader was quoted as saying by the paper.

These leaders in their request to the government of Pakistan had also mentioned about their financial income and sources of earning. The same was forwarded to the UNSC along their bank account numbers and other related details, it added.

Saeed-led JuD is the front organisation for the Lashkar-e-Toiba (LeT) which is responsible for carrying out the 2008 Mumbai attack that killed 166 people, including six Americans.

The US Department of the Treasury has designated Saeed as a Specially Designated Global Terrorist. He was listed under the UN Security Council Resolution 1267 in December 2008.

His bank accounts were frozen by the Pakistani government complying with the UNSC resolution.