In a Twitter video message, Maryam and Nawaz Sharif urged his followers to stand by him and help him ‘change the fate of Pakistan’. 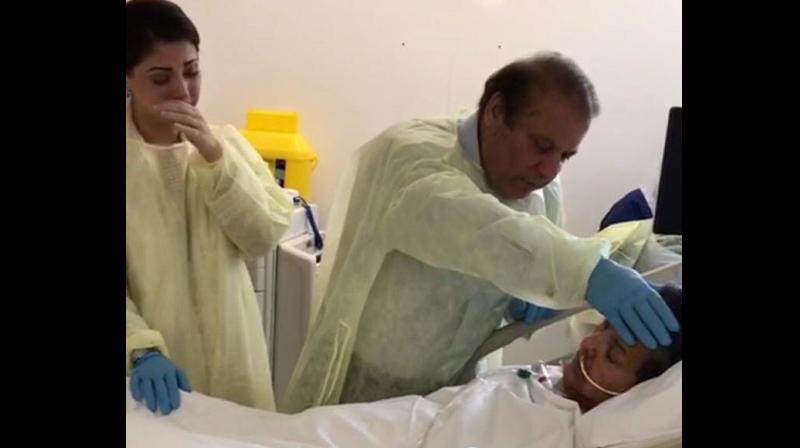 The picture was retweeted by Maryam, which shows her breaking down as her father keeps his hand on her mother’s forehead before leaving for the airport to return to Pakistan where they will be arrested upon their arrival. (Photo; TWitter | @MaryamNSharif)

The picture was retweeted by Maryam, which shows her breaking down as her father keeps his hand on her mother’s forehead before leaving for the airport to return to Pakistan where they will be arrested upon their arrival.

Kulsoom Nawaz, Sharif’s wife has been undergoing treatment at the Harley Street Clinic in London and her health is said to be ‘highly critical’. Its been almost a month that she has been on life support- on ventilator and had even slipped in coma.

"This picture will haunt many in the future," tweeted the Pakistani journalist who first posted the photo on social media.

The emotional family picture is being shared on social media and some have called it as ‘ugliest face of Pakistani establishment’ as they are expected to be arrested mid-air, when their flight enters Pakistani territory.

Nawaz Sharif, hours before his arrest said, "Maryam and I are coming back to face prison, and even if they send me to the gallows, we know that freedom cannot be won without sacrifice. It is not easy to leave my wife on a ventilator in a hospital, but I am returning along with my daughter to play our role to rid of this slavery."

While addressing a conference of PML-N party in London he added, "Despite seeing the bars of prison in front of my eyes, I am going to Pakistan."

Nawaz Sharif was sentenced to 10 years of prison by a court in Islamabad last week over puchase of four flats in London. He was ousted from his third time prime minister post by the Supreme Court of Pakistan. He is banned from politics for life but a powerful symbol for his party.

With imprisonment sentence, he was asked to pay a fine of eight million pounds in Avenfield Reference case.

In a Twitter video message, Maryam and Nawaz Sharif urged his followers to stand by him and help him ‘change the fate of Pakistan’.

I'll be taken straight to jail.But I'm doing this for people of Pak,sacrificing for generations to come.Such opportunity won't come again.Let's build destiny of Pak together: Nawaz Sharif on-board flight to UAE's Abu Dhabi Airport.He&his daughter Maryam have landed at the airport pic.twitter.com/abRdWKtXnO

Sharif and his daughter are expected to land at 6:15 pm (local time) at Lahore’s Allama Iqbal International Airport.