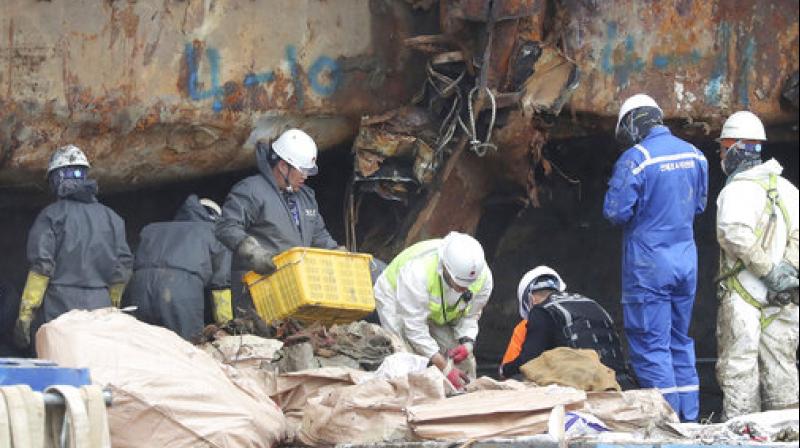 Workers search for bone fragments from the wreckage of the salvaged ferry Sewol at a port in Mokpo, South Korea. (Photo: AP)

Seoul: More suspected human bones were recovered Saturday from South Korea's sunken Sewol ferry, officials said Saturday, part of a search that began when the ship was salvaged in March.

The 6,800-ton vessel sank off the country's southwestern coast three years ago, claiming more than 300 lives, mostly high school students on an excursion.

"Bones were recovered Saturday from the fourth deck near the stern," the maritime ministry said in a statement.

Forensic experts have sent the bones for DNA tests, the statement added. The results will be known in a month.

One of the country's worst-ever maritime disasters, the sinking of the Sewol dealt a crushing blow to now-ousted president Park Geun-Hye.

Nine of the victims' bodies have yet to be recovered. Raising it in one piece was a key demand of their families.

Sifting through silt and debris piled up inside the hull, workers have been retrieving bones every day since Wednesday when suspected human bones were found inside the wreck for the first time.

Last week, a diver combing the sea bed where the ferry had been lying found a bone fragment believed to be from a human shin.

Investigations concluded the disaster was the result of numerous human factors, including an illegal redesign, an overloaded cargo bay and inexperienced crew.