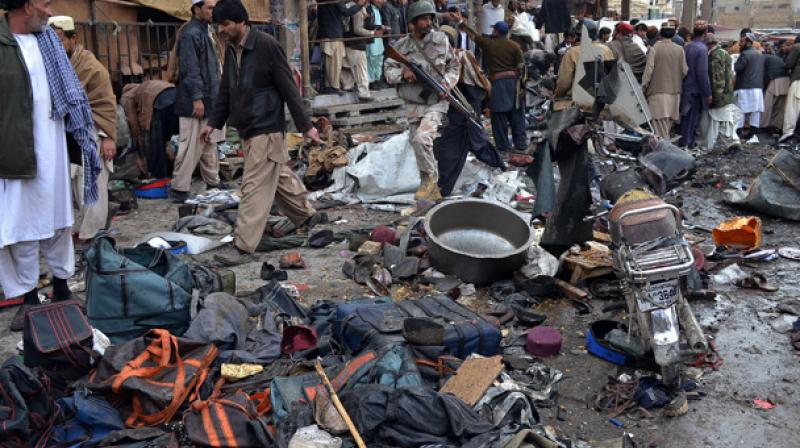 Karachi: Nearly 52 people, including women and children, were killed and more than 100 injured on Saturday in a blast at a popular shrine in Pakistan's volatile Baluchistan province, officials said.

The blast occurred in the remote Hub region in Lasbela district where devotees were attending a Sufi dance called "dhamaal" at Dargah Shah Noorani shrine.

However, an official of the Edhi Trust Foundation told local media that nearly 30 people, including women and children, were dead and around 100 injured in the blast.

"Our local focal person has told that about 30 people were killed," said the Trust's Hakeem Lassi.

Bugti said it was a remote area and it would be quite a task to retrieve the dead and injured when already darkness engulfed the region. So far nobody has claimed responsibility for the attack.

"The shrine is located some 250 kilometres from Karachi in the remote mountains of Uthal and our vehicles have been dispatched there to carry out rescue operations and shift injured to the hospitals," Lassi said.

He said the casualties have been confirmed to them by the organisers of the shrine in Lasbela.

The local tehsildar in Lasbela, Javed Iqbal said security arrangements at the Shah Noorani shrine were not properly arranged.

"It is sad that although thousands of devotees from Karachi and other parts of the country visit the shrine everyday but there are no medical emergencies or ambulances at the site," he said.

He said the devotees take part in the 'dhamaal' everyday after sunset and the blast took place close to where they were dancing in a trance inside the compound of the shrine.

This is not the first time that extremists have targeted a shrine in Baluchistan. This is the third major incident of a bomb going off in the province since August.

In August about 70 people were killed in a suicide bomb attack outside the civil hospital in the provincial capital Quetta. Last month, 64 police cadets and two army men were killed when three terrorists raided a police training centre in Quetta.