Khyber Pakhtunkhwa province is conducting a census of Chinese nationals and raising a force of about 4,200 officers to protect foreigners. 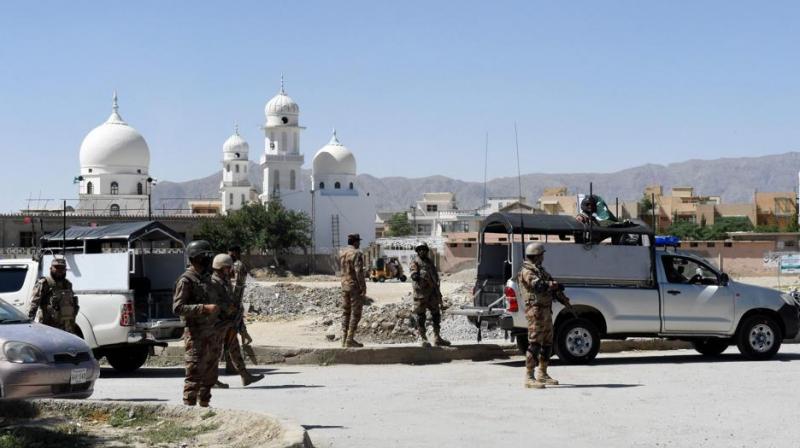 Pakistani soldiers stand guard at the site where a Chinese couple was kidnapped in the neighbourhood of Jinnah town in Quetta. (Photo: File/AFP)

Islamabad: Chastened by the Islamic State's claim to have killed two kidnapped Chinese teachers, Pakistan is beefing up security around Chinese citizens streaming into the country on the back of Beijing's "Belt and Road" infrastructure splurge.

China has often urged Pakistan to improve security after pledging around USD $57 billion to build power plants, railways, and roads that will cross the Himalayas to connect western China with Pakistan's Arabian Sea port of Gwadar.

Pakistani officials have outlined to Reuters extensive security plans that include thousands-strong police protection forces, tighter monitoring of Chinese nationals, and in the province of Baluchistan where the two teachers were kidnapped on May 24 a review of security arrangements.

The protection forces will buttress a 15,000-strong army division set up specifically to safeguard projects in the China-Pakistan Economic Corridor (CPEC) initiative, which has been credited with rejuvenating Pakistan's USD $300 billion economy.

"We are already alert, but this incident has made us extra vigilant over Chinese security," said Amin Yousafzai, deputy inspector general of police for the southern province of Sindh, which is home to about 50 million people.

Sindh is raising a protection unit of about 2,600 police officers to help safeguard 4,000 Chinese working on CPEC projects, and another 1,000 working in other businesses.

Khyber Pakhtunkhwa province, which signed billions of dollars in contracts with Chinese companies, is also conducting a census of Chinese nationals and raising a force of about 4,200 officers to protect foreigners.

Baluchistan would "review the whole security arrangement" and Chinese nationals who come in a private capacity should inform the authorities about their activities, said Anwaar-ul-Haq Kakar, spokesman for the provincial government.

The number of militant attacks in Pakistan has fallen sharply in recent years, but violent Islamist groups still pose a threat, and in Baluchistan separatists opposed to CPEC also carry out attacks.

The Islamic State killings were a rare attack on Chinese nationals in Pakistan, but the incident has unnerved Islamabad and the growing Chinese community.

Miftah Ismail, a state minister involved in CPEC planning, said Pakistan had devoted huge resources to improving security and Chinese investors should not be put off by a one-off attack. "The country's security situation has improved," Ismail said.

The scale of the task facing security agencies is increasing by the day as more Chinese entrepreneurs arrive to set up businesses. Most stay in big cities, but some venture into riskier areas.

The challenge for authorities will increase in 2018, when the corridor is due to become operational and trucks ferrying goods to and from China cross more than 1,000 km (620 miles) of road in remote Baluchistan areas currently off-limits to foreigners.

Protection Force:
The two Chinese-language teachers were kidnapped by gunmen pretending to be police, but little else is known about how the they ended up in Baluchistan's provincial capital, Quetta.

Baluchistan's government afterwards evacuated 11 other Chinese nationals based in the city. "There are no more Chinese living in Quetta", said Ahsan Mehboob, Baluchistan's inspector general of police. It was not clear why the 11 were there.

Khyber Pakhtunkhwa province was already working on plans to set up the force, but after the Quetta kidnappings the process was "accelerated", according to one regional official. Sindh was also planning to set up a force before the Quetta attack, and was now expanding it, another official said.

Punjab's SPU, dedicated to protecting Chinese nationals and other foreigners, has more than 6,000 officers and is set to grow to 10,000.

Raja Jahangir, Punjab secretary for information, said SPU chiefs hold daily meetings with intelligence agencies and police chiefs to ensure Chinese nationals stay safe, while a database has been set up to track foreigners from their arrival, to their hotels, and their departure. Jahangir said security has been stepped up since the Quetta attacks.

"Almost all personnel are on alert and they are on their toes," he said.