Haroon Bilour among 13 killed, 50 injured in suicide blast at poll rally in Pak

This is the second terrorist attack on an election rally in Pakistan ahead of the July 25 general election. 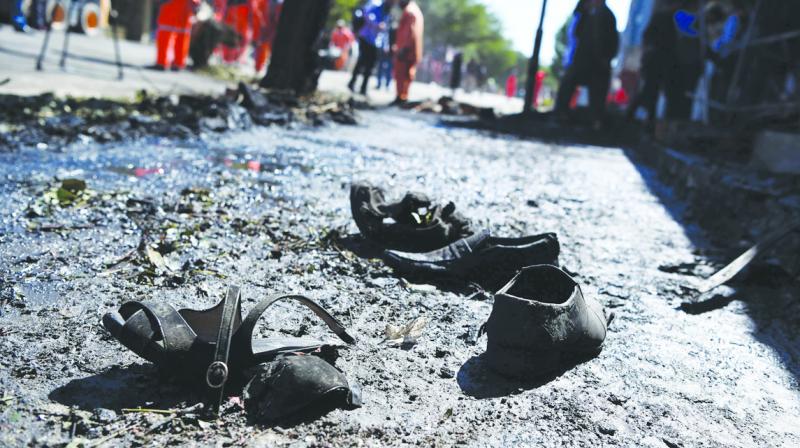 The blast took place shortly before midnight on Tuesday night when ANP leader Haroon Bilour along with other party workers gathered for a corner meeting in the congested Yakatoot area. (Photo: File | Representational)

Peshawar: At least 13 people, including a senior Awami National Party leader, were killed and 50 others injured in a suicide bomb attack targeting an election rally in Pakistan's northwestern Peshawar city, the second terrorist attack on a poll rally ahead of the July 25 general elections.

The blast took place shortly before midnight on Tuesday night when ANP leader Haroon Bilour along with other party workers gathered for a corner meeting in the congested Yakatoot area. The blast occurred near the vehicle of Bilour, son of the late ANP leader Bashir Bilour, who was also killed in a suicide attack when a Pakistani Taliban bomber blew himself up at a party meet in Peshawar in 2012.

Thirteen people were killed and 47 others were injured in the blast, said the officials at the Lady Reading Hospital, where the victims were shifted.

City police chief Qazi Jameel said Bilour, the ANP candidate from PK 78 constituency in Peshawar city, was among those killed.

Fireworks were being burst as Bilour arrived on the stage when the suicide bomber blew himself up. Bilour suffered serious injuries and was shifted to the hospital where he succumbed to the wounds. Bomb disposal squad chief Shafqat Malik said eight kilos of TNT explosive was used in the blast.

Rescue teams and law enforcement agencies have reached the site of the blast and investigations into the incident are underway.

This is the second terrorist attack on an election rally in Pakistan ahead of the July 25 general election.

Earlier this month, seven people including a candidate of the Muttahida Majlis-i-Amal, a gathering of religious parties were injured in an explosion during an election rally near Takhtikhel also in the KPK province. ANP supporters gathered outside the hospital and shouted slogans against the government for its failure to provide security to their leader.

Pakistan's Chief Election Commissioner (CEC) Sardar Muhammad Raza strongly condemned the attack. "This shows the weakness of our security institutions and a conspiracy against transparent elections," he said in a statement.

The ANP is a mainstream national party headed by Asfandyar Wali Khan, the grandson of nationalist leader Abdul Ghaffar Khan commonly referred to as Bacha Khan among the Pushtuns. The ANP, which governed the Khyber Pakhtunkhwa province from 2008 to 2013, has been targeted by the TTP for carrying out operations against militant outfits in the Northwestern region of Pakistan and being secular in its ideology.

The National Counter Terrorism Authority (Nacta) on Monday had told a Senate standing committee that some leading political leaders faced death threats from militant outfits ahead of the July 25 general elections in Pakistan. The leaders include Pakistan Tehreek-e-Insaaf (PTI) chief Imran Khan, the son of Mumbai attack mastermind Hafiz Saeed, Asfandayar Wali Khan, and senior leadership of other parties.