The historic constitutional amendment breezed through the rubber-stamp parliament with 2,958 in favour. 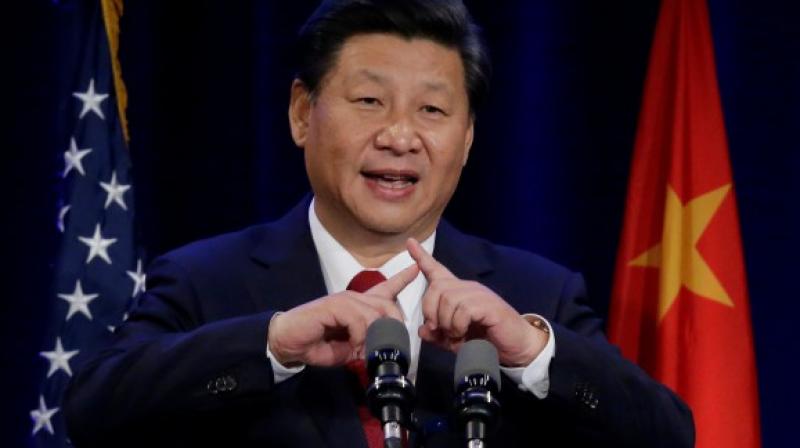 Xi, 64, has consolidated power since 2012 when he was appointed to the country's top office: general secretary of the Communist Party. (Photo: AP)

Beijing: China's Xi Jinping on Sunday secured a path to rule indefinitely as parliament abolished presidential term limits, handing him almost total authority to pursue a vision of transforming the nation into an economic and military superpower.

The historic constitutional amendment breezed through the rubber-stamp parliament with 2,958 in favour, two against and three abstentions despite an unusual bout of online criticism that censors have scrambled to extinguish.

Xi stood up first at the imposing Great Hall of the People in Beijing to cast his paper ballot in a red box, as delegates of the National People's Congress applauded after each vote on the constitutional amendment to lift the two five-year term limit for the presidency.

The first constitutional amendment in 14 years had been expected to breeze through the legislature, which has never rejected a Communist Party diktat in its half-century of existence.

"This is the urgent wish of the common people," Ju Xiuqin, a delegate from northeastern Heilongjiang province, said, echoing party claims that the amendment had the unanimous support of "the masses".

Xi, 64, has consolidated power since 2012 when he was appointed to the country's top office: general secretary of the Communist Party.

While the position has no term limits, his two predecessors both gave it up after two terms as part of an orderly process established by Deng.

The country's presidency is a largely ceremonial office, but the constitutional limits meant Xi would have had to give it up in 2023.

But with the new amendments, he could now have a lifetime to push his goal of turning China into global economic powerhouse with a "world-class" military by mid-century.

His rise has been accompanied by tighter restrictions on civil society, with the detention of activists and lawyers, and stricter limits on the already heavily controlled internet.

At the same time, he gained a measure of popularity among Chinese people through a relentless crackdown on corruption that has punished more than a million party officials, and sidelined potential rivals.

"I think that during the past five years, he has been carrying out a soft coup, including making the Politburo a mere figurehead," Chinese political commentator Wu Qiang said, referring to the 25-member Communist Party body one level under the ruling council.

"He wants to prevent power from falling into the hands of technocrats like Jiang (Zemin) and Hu (Jintao)," Wu said, referring to Xi's two predecessors.

While attention has focused on the term limits, the amendments also include major provisions that will engrave Xi's eponymous political mantra in the constitution and hand the Communist Party an even larger role in the country's affairs.

In a written report, the head of the parliament's Standing Committee, Zhang Dejiang, said the amendments "will ensure the constitution improves and develops in step with the times and provide a firm constitutional guarantee for upholding and developing socialism with Chinese characteristics in the new era".

The Communist Party says the move merely aligns the presidency with the limit-free titles of party secretary and military chief, claiming "the masses" unanimously called for the removal of term limits.

But the proposal was kept secret until it was revealed in a state media report on February 25, a week before the legislature's opening session.

The party later disclosed that Xi had presided over a meeting of the Politburo in September during which the leadership decided to revise the constitution.

The party then sought proposals and opinions, culminating in a decision in late January to introduce constitutional amendments at the NPC.

"Xi Jinping has presided over so many important projects such as economic reforms and the fight against corruption. There was a consensus that we supported him having more time to finish his work," said Dou Yanli, a delegate from eastern Shandong province.

The surprise move triggered a backlash online, prompting censors to block phrases and words such as "I disagree" and "emperor" and the image of Winnie the Pooh, the cartoon bear to which Xi has been compared.

Activists fear that removing term limits may lead to a further tightening of already strict controls on media, civil society and religion, as Xi tries to impose his highly ideological vision of socialism on every aspect of society.

Beijing-based activist Hu Jia, who says authorities forced him to leave the capital during the congress, called the amendment "illegal".

"Xi asked all people to obey the constitution, and then used the amendment to place himself above it. He used the constitution as the ultimate legal weapon that binds officials and all citizens."