India too did not call the interaction a ‘bilateral meeting’ but said that a range of issues were discussed by the 2 leaders. 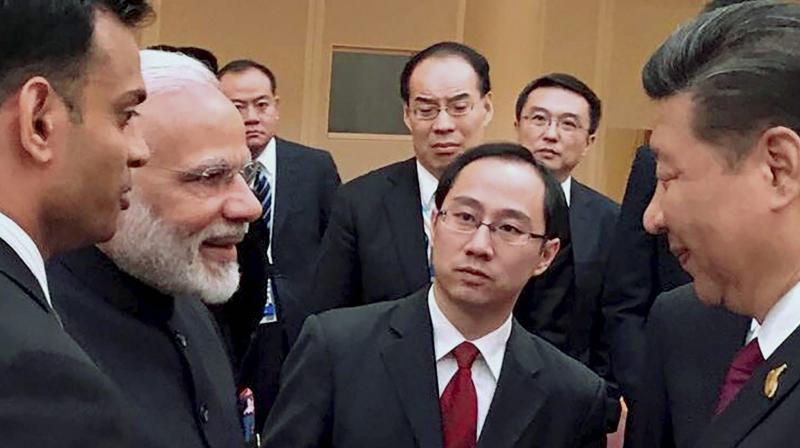 When asked about a photograph tweeted by the India's Ministry of External Affairs showing the two leaders in conversation with interpreters, Chinese Foreign Ministry spokesman, Geng Shuang stuck to his stand. (Photo: AP)

Beijing: China on Monday refused to acknowledge the interaction between Prime Minister Narendra Modi and President Xi Jinping on the side-lines of the G20 summit at Hamburg last week, insisting that no "bilateral meeting" took place between the two leaders.

India too has not described the interaction, which included a handshake, as a "bilateral meeting" but said that "a range of issues" were discussed by the two leaders. The Indian side has said that the interaction lasted five minutes.

Faced with a barrage of questions by reporters on how China viewed the interaction, Foreign Ministry spokesman, Geng Shuang would only say repeatedly that no bilateral meeting took place.

"According to my information, the two leaders did not hold any bilateral meetings," he said. "On the side-lines of the G20, President Xi also presided over the informal BRICS leaders meeting. Prime Minister Modi and other leaders of the BRICS countries also attended that event", he said.

Asked again if the meeting did not happen at all, he said: "So my answer is that the two heads of state of India and China did not hold any meetings on the side-lines of the G20 summit in Hamburg."

China's insistence on the set-piece wording, and its refusal to waver from it, apparently was aimed at reiterating its view made clear before the Hamburg meeting: that the "atmosphere was not right" for a meeting between the two leaders due to the standoff between the two militaries at Doklam area in Sikkim sector, where Indian troops stopped road construction by Chinese soldiers.

China has been calling for immediate withdrawal of the Indian troops from the area.
He was also asked about a photograph tweeted by the India's Ministry of External Affairs showing the two leaders in conversation with interpreters, Geng stuck to his stand.

"As I said many times, the two state leaders of India and China did not hold any bilateral meeting ... But President Xi chaired the informal BRICS meeting during which Prime Minister Modi was also present".

Asked whether the standoff at Doklam was discussed, Geng said, "On the border issue, we reaffirmed that the Indian side should withdraw their border personnel to the Indian side.”