WHO calls for 'intermittent' lockdowns in Pakistan as virus surges

Hospitals across Pakistan say they are at or near capacity, and some are turning COVID-19 patients away 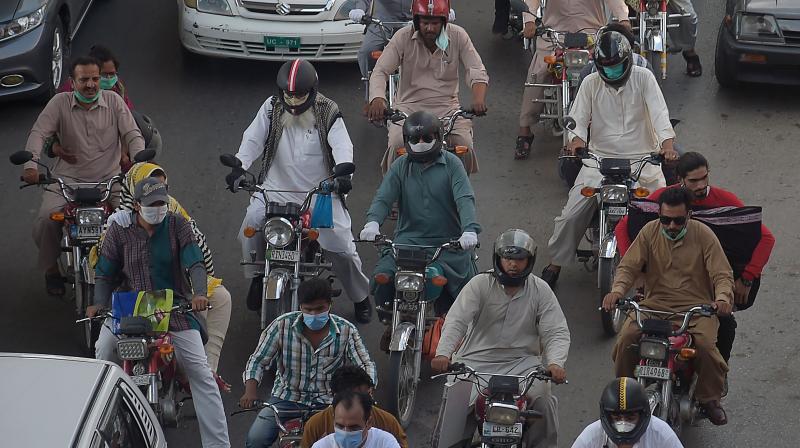 Commuters return from the capital city of Islamabad, in Rawalpindi. (AFP)

Islamabad: The World Health Organization has told Pakistan it should implement "intermittent" lockdowns to counter a surge in coronavirus infections that has come as the country loosens restrictions, officials said.

Since the start of Pakistan's outbreak in March, Prime Minister Imran Khan opposed a nationwide lockdown of the sort seen elsewhere, arguing the impoverished country could not afford it.

Instead, Pakistan's four provinces ordered a patchwork of closures, but last week Khan said most of these restrictions would be lifted.

Health officials on Wednesday declared a record number of new cases in the past 24 hours. The country has now confirmed a total of more than 113,000 cases and 2,200 deaths -- though with testing still limited, real rates are thought to be much higher.

"As of today, Pakistan does not meet any of the pre-requisite conditions for opening the lockdown", the WHO said in a letter confirmed by Pakistan officials on Tuesday.

Many people have not adopted behavioural changes such as social distancing and frequent hand-washing, meaning "difficult" decisions will be required including "intermittent lockdowns" in targeted areas, the letter states.

Some 25 percent of tests in Pakistan come back positive for COVID-19, the WHO said, indicating high levels of infection in the general population.

The health body recommended an intermittent lockdown cycle of two weeks on, two weeks off.

Responding to the WHO's letter, Zafar Mirza, the prime minister's special advisor for health, said the country had "consciously but gradually" eased lockdowns while enforcing guidelines in shops, mosques and public transport.

"We have to make tough policy choices to strike a balance between lives and livelihoods," Mirza said Wednesday.

Punjab's provincial health minister Yasmin Rashid, who received the WHO's letter, said the provincial government had already given "orders to take strict action against those violating" virus guidelines.

Hospitals across Pakistan say they are at or near capacity, and some are turning COVID-19 patients away.

WHO Director-General Tedros Adhanom Ghebreyesus said Monday that 136,000 cases had been reported in the previous 24 hours, "the most in a single day so far", with the majority of them in South Asia and the Americas.