The plane had descended in an unsymmetrical manner after which it lost altitude in the few moments before it crashed. 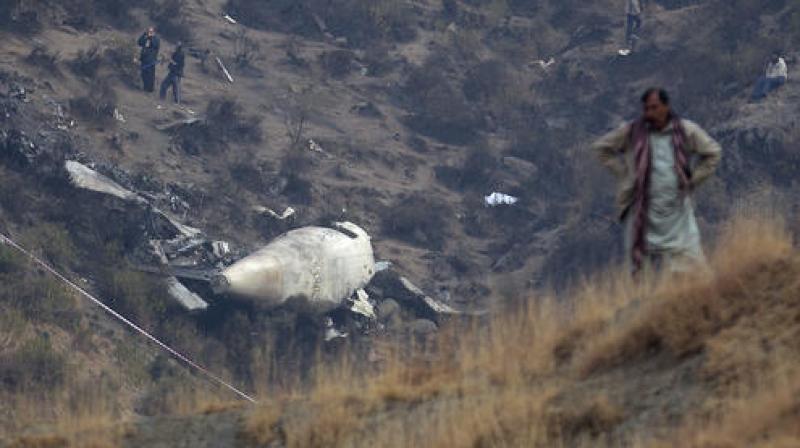 A villager stands near the wreckage of a passenger plane crash in Gug near Havelian. (Photo: AP)

Islamabad: One of the engines of the ill-fated Pakistan International Airlines flight PK-661 developed fault leading to the crash that killed everyone on board, according to an initial inquiry.

While flying smoothly at 13,375 feet, the left engine of the plane malfunctioned, exploded and damaged a wing, Dawn reported, citing the initial inquiry by the Civil Aviation Authority.

So far PIA has not released any report on the cause of the crash. Earlier, it had said the real cause of the accident would only be determined once the data from the black box had been analysed.

The plane had descended in an unsymmetrical manner after which it lost altitude in the few moments before it crashed.

The plane had started bumping at around 4.12 PM, which is when the pilot had reported the engine failure. It gradually lost 2,000 feet, entered free fall and lost another 1,800 feet in a millisecond, the paper said, citing the report.

The report says that the plane had been stable for a few milliseconds and the pilot gained some control. It glided for a few seconds before the free fall at around 4.13 pm but within minutes disappeared from the radar.

It suggests that the ATR 42-500 is one of the most recent versions of the aircraft. Its first delivery was made in 1995 while the plane in question was delivered to the PIA in 2007.

The plane had one instance of an engine failure in 2014. The engine was replaced and since then, it had been operating smoothly.

The ATR 42-500 has six-bladed propellers powered by PW127E engines rated at 2,400 shp (1,800kW) for improved high performance and increased cruise speed. Its engines are certified to be safe and strong in a variety of conditions. It had flown 18,740 hours before it crashed on Wednesday.

The weather conditions in the area were normal at 4.10pm. Temperature was recorded at 23C, dew point at 10C, humidity at 44pc, air pressure at 1,016 hPa and visibility at 16km. The wind’s direction was south-east and the speed 7.4km/h.