Former Pak PM Sharif to be indicted on Oct 13, daughter, son-in-law get bail

The cases were filed after the July 28 verdict by the Supreme Court which disqualified Sharif. 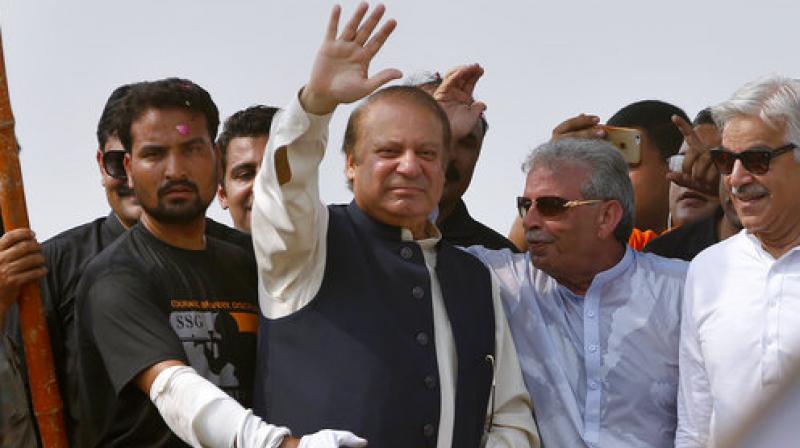 Deposed Pakistan Prime Minister Nawaz Sharif waves to his supporters during a rally in Muridke, Pakistan, on August 12. (Photo: AP)

Islamabad: Pakistan's ousted Prime Minister Nawaz Sharif failed to appear on Monday before an anti-graft court which set October 13 as the date of his indictment even as the daughter and son-in-law of the embattled premier were granted bail in the Panama Papers case.

Maryam Nawaz, 43, along with her spouse, former army captain Muhammad Safdar, returned to Islamabad late last night from London to appear in the National Accountability Court.

Safdar was arrested on his arrival as the court had issued non-bailable arrest warrant against the former Pakistan Army Captain.

Both appeared separately in the accountability court of Judge Muhammad Bashir here.

Sharif and his two sons were absent during the hearing as they are in London to attend his wife Kulsoom who is battling throat cancer.

Sharif had attended the previous two hearings but flew to London last week to see his ailing wife, who underwent a third surgery.

The court accepted the bail applications of Maryam and Safdar and postponed the hearing till October 13, according to court officials.

Sharif's lawyer Khawaja Harris asked the court to adjourn hearing for 15 days with commitment that Sharif would also appear. The court rejected the plea announced that it will indict the accused during the next hearing.

The court also ordered to start the process of declaring Sharif's sons -- Husain and Hasan -- proclaimed offender as they have failed to appear before it so far.

The court also decided to conduct separate trials of Husain and Hasan from Sharif and his daughter and son-in-law.

Amid tight security, Maryam, 43, who is being groomed as Sharif's political successor, appeared in the court for the first time today.

She was ordered to submit a surety bond of Rs 50,000 against a non-bailable arrest warrant against her.

The National Accountability Bureau (NAB) officials informed the court that Nawaz's sons Hassan and Hussain had left the country and were deliberately avoiding court appearances.

The NAB lawyers asked the court to send Safdar to jail on judicial remand but the court granted him bail and ordered him to pay Rs 50,000 for surety bonds.

The court also asked him to seek its permission before going abroad and rejected the NAB request to confiscate his passport.

Both Maryam and Safdar have been charged by the NAB in one of three corruption cases filed on September 8 against Sharif.

Maryam criticised the arrest of her husband and said he was taken into custody despite the fact that he had come back to face the case.

"Those who want to appear by free will are arrested from airport, but we are not afraid of it,” she said.

Referring to Pakistan Tehreek-e-Insaf chief Imran Khan who has refused to appear in several cases, Maryam said that the "absconders are free and hold public meetings".

She also criticised the judges for disqualifying her father in the Panama Papers case.

"Questions will be asked if the cases which started with Panama ended with Iqama (Job contract). The judges would have to answer it,” she said referring to dismissal of Sharif for non-declaration of his salary from his son’s company in the UAE.

"Those who sent home representative of 20 crore people should also be brought to justice," she said.

During the hearing, Sharif’s lawyer also presented an application to exempt him from appearing before the court today. The court accepted the plea.

The court had issued non-bailable arrest warrants against Husain, Hasan and Safdar last Monday after they failed to appear before it.

The cases were filed after the July 28 verdict by the Supreme Court which disqualified Sharif.

Sharif was re-elected as the president of the ruling Pakistan Muslim League-Nawaz on October 3 and immediately demanded that those who disqualified him should respect the people's mandate and democracy.